Monday Ratings: CNN’s Cooper Beats All Of MSNBC In Demo (Except For Maddow) 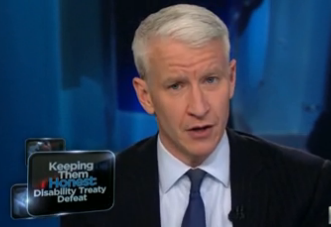 Monday night, CNN’s Anderson Cooper beat everyone on CNN and MSNBC in the key 25-54 demo, save for MSNBC’s Rachel Maddow.

Cooper’s 250k in the demo was enough to beat out all his CNN colleagues for the evening, as well as MSNBC’s programming. The only show among the two networks to beat Cooper in the demo was Maddow, who racked up 314k viewers.

In total viewership, Cooper did beat all of CNN but only defeated MSNBC’s Ed Schultz 10 p.m. re-airing, with all other MSNBC shows racking up more total viewers than the CNN host.