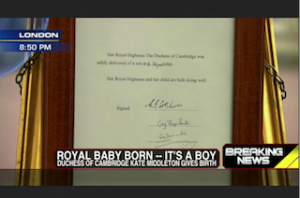 CNN beat Fox in the demo during the 10pm hour when they aired a special on the royal birth. Will And Kate +1 had 265K viewers in the demo, beating Fox’s Greta Van Susteren, who had 173K.