Monday Ratings: The Five Soars To Its Highest Ever Ratings

Monday Ratings: The Five Gets Its Highest Ratings Ever 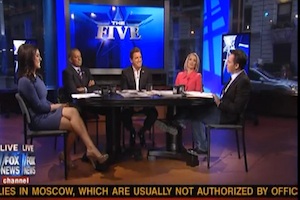 With a shout-out from Entertainment Weekly boosting its place in the public eye, FOX News’ The Five produced its highest ratings in the show’s history on Monday night, attracting 460,000 viewers in the 25-54 year-old demo. The Five, FOX News’ multi-headed replacement for Glenn Beck, debuted in July and has gathered a respectable following over the past four months. It was an especially strong night for cable news across the board, as the Conrad Murray verdict, Herman Cain sexual harassment allegations, and Penn State child molestation news combined to bring in viewers in bunches to the cable news shows.

Other nuggets from Monday night:

The rest of your Monday night ratings: