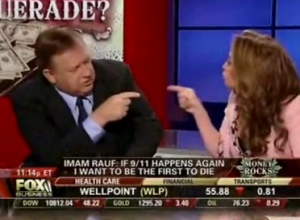 The calendar may say the summer’s over, but that doesn’t mean we can’t all try to hold on to those lovely warm months. In Los Angeles, for instance, people are pretending it’s still July by suffering through a terrible heat wave. Meanwhile, the guests on Money Rocks are helping out by continuing to shriek at each other over that whole “Ground Zero Mosque” thing in a segment that got downright ugly.

The gritty stuff started during a discussion of guest Pamela Geller’s participation in a report on the subject from the most recent 60 Minutes. Geller took the cue to instead attack Bob Beckel, sitting next to her, for “carrying water for the most radical, intolerant ideology in the world today.” Before we could even begin the headline for a post entitled “Pam Geller Generalizes Muslims” or some such thing, Beckel shot back with enough offensive comments to make Geller look like the model of tolerance.

So far we’re learning that all Muslims are terrorists and all women are subservient creatures who should fear the stronger sex. Got it?

While those two were going at it and arguing over who was “pointing at” who like backseat passengers on a long family road trip, David Webb accused Beckel of believing that 9/11 victims should “just get over it” and asked if he thought black people should “just get over” slavery. Shockingly, that didn’t calm things down. Meanwhile, Ahmed Rehab of CAIR called Geller a “certified bigot.” Eric Bolling, gradually reigning in the circus, chuckled when Rehab claimed the proposed Islamic Community Center would be “the worst thing for al Qaeda” and invited him back saying he had “interesting things” to say. With his last moments, Rehab took another shot at Geller’s blog, Atlas Shrugs. Geller, has since responded by posting pictures of Rehab in…lipstick?

Ah, summer. Don’t you miss how the weather was nice, people were relaxed, and debates like this brought out the best in people?