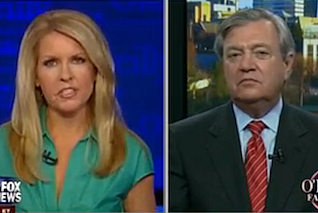 O’Reilly Factor guest-host Monica Crowley fought with former South Carolina Democratic Chairman Dick Harpootlian Friday night over whether the mess of scandals around the Obama administration is destroying the president’s credibility or merely distracting the right from policy.

Crowley maintained that the “drip drip drip” of scandals, without strong rebuttal from Obama, would erode his public trust.

“He is not running for reelection,” Harpootlian said, “so this is not about how it’s going to play in the next campaign.”

“So that’s okay?” Crowley said. “Because he’s not running for reelection, is that okay that he doesn’t give the American people answers?”

“What’s he going to give an answer on the NSA so-called scandal?” Harpootlian asked. “So we find out the NSA has been intercepting or looking at patterns in telephone calls, e-mail, texts, electronic communication to catch terrorists. They’ve stopped several terror plots, saved American lives. You know what? I don’t know anybody who thinks that’s wrong. Where’s the scandal?”

Crowley pressed on Obama’s supposed silence on the various stories. (He’s addressed each individually, but not in much detail.)

“If I were a president who was innocent of all of the charges and allegations against me, then I would be shouting this from the roof tops,” Crowley said. “This president has not gone before the American people, say, call a primetime press conference, as presidents once did, lay it all out. But then I thought he cannot really do that. That only works if you’re not guilty.”

Crowley also accused Obama of side-stepping issues beyond the scandals, such as the economy and the deteriorating situation in Syria.

“You heard from him yesterday on Syria!” Harpootlian protested.

“And he told us he would meet with the G-8 next week and see,” Crowley said. “So he’s going to ruminate for another week.”

“Let’s put this in an historical context,” Harpootlian said. “Did they ever find those weapons of mass destruction?