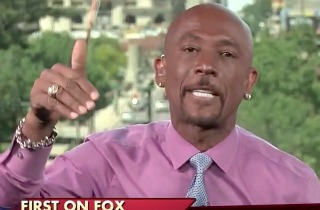 Talk show host Montel Williams is an American veteran, and he is particularly incensed about the scandal over veteran deaths as a result of secret waiting lists. Moreover, he was bothered by how President Obama was at West Point, yet didn’t take a moment to apologize for how his administration has dropped ball on veterans’ health.

Williams told Neil Cavuto that giving Secretary Shinseki the boot won’t really fix much. He said soldiers left the battlefield abroad only to come back to another battlefield at home, saying he is “angry” as hell because “our guys went over, they’ve left body parts, some of them never made it back, some of them are here now but their souls are still there, and we have the audacity to turn our back on them right this second.”

As for Obama’s West Point speech, Williams bewilderedly said, “The president just promised five billion dollars for terrorists around the world at West Point?! Where he could have used the day to say, ‘I’m sorry for the pain that I’ve caused you, the families, and I’m gonna fix it today!'”

He called for a “VA surge” to help these veterans, and had some tough words for the nation on how it’s gradually forgotten about veterans over the years. “Be as tired as you want,” Williams said, “but that barbecue you had on Sunday was paid for on the backs of soldiers who left body parts in the battlefield. So you have no right to forget!”

Watch the video below, via Fox: