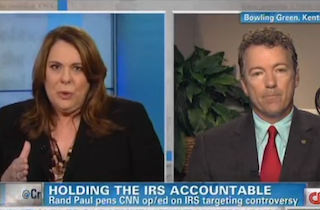 Broaching the topic on Benghazi on this week’s State of the Union, host Candy Crowley challenged guest Sen. Rand Paul (R-KY) over his criticism of Hillary Clinton. Pointing to the timing of Paul’s stating she should not be able to hold “higher office,” Crowley asked him about the “danger that this looks a lot more political than policy.”

Crowley recalled Paul’s remarks in Iowa (“which we all know that has a political overlay”), where he said Clinton’s “inexcusable” handling of Benghazi “should preclude her from holding higher office.”

“When you make remarks like that — and you may make similar ones when you go to New Hampshire, another place with great political overlay — doesn’t it undercut the idea that this is about policy?” she asked.

Paul said he “absolutely sticks by them,” pointing to the “Black Hawk Down” incident in Somalia, after which Defense Secretary Les Aspin was reportedly asked to resign. “But nobody asked him to do it in Iowa or New Hampshire,” Crowley interjected.

She stuck with the point about how Paul’s remarks came during trips to politically important states, which gives it a political aspect. Asked if that’s “helpful,” Paul countered, “I’ve done it in every state in every stop — because I think it’s pretty important that she accept blame for not providing security.”

“Whether it has political overtones or not,” he added, “it really goes to the heart of who you are as secretary of state if you do not provide security for an embassy that’s begging for it. That’s absolutely a dereliction of duty. And she should’ve resigned and accepted blame for it.”