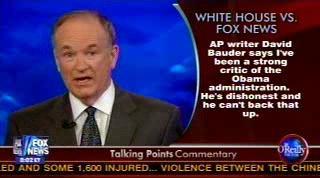 We’ve written about the winner (at least after this latest round) in all the Fox News vs. White House battling – and it’s the “fair and balanced” network.

As the week goes on, others have weighed in on which side’s strategy is prevailing as well.

Hal Boedeker writes in the Orlando Sentinel about the White House “complaints come off as whining,” while U.S. News & World Report‘s Doug Heye describes it as a “riskier strategy – to ostracize and attack a media outlet and its viewing audience.” PRNewser’s Joe Ciarallo asks if the White House made the move because “Fox News is the one critic that is too big to ignore?”

Here’s some thoughts from the Columbia Journalism Review:

The administration is not only glibly ignoring the substantial disconnect between Fox’s reporting and its pundit-ing; it is also implicitly suggesting that the viewers in question don’t deserve anything but propaganda. Otherwise, wouldn’t the White House, rather than simply alienating the network and leaving it to its wretched nefariousness, redouble its efforts to reach out to Fox’s audience.

John Batchelor at The Daily Beast agrees FNC is winning the PR war, but thinks it’s wrong for the White House since FNC is less relevant than they think. “Fox News is not in the news business; it’s in show business,” he writes. “The Republican Party, like its blood kin the Democratic Party, is in the campaign business. The White House is in the government business, though, from the evidence so far, it doesn’t know how to break out of the campaign business.”

TVNewser put it to a poll – and while you may expect the readers on the right to sway toward FNC and those on the left to go for the White House, 84% chose, “These tactics backfire. And Ailes knows how to fight.”