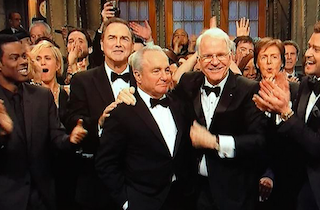 Leaving aside its post-Super Bowl programming, the SNL show was NBC’s highest-rated primetime entertainment telecast in more than eight years in the demo and more than 10 years in total viewers. You have to go all the way back to a 2004 episode of ER that aired after the Frasier finale and drew 23.9 million viewers to find a higher-rated show on the network.

The hour-long red carpet special that ran before the show also did well for NBC, beating all its competition, including CBS’ 60 Minutes, with a 3.0 in the demo and 11.1 million viewers overall.

According to Nielsen, a total of 9.1 million people in the U.S. saw 1.3 million tweets about the special, which were sent by over 449,000 unique users, creating 188 million impressions, or more than the series finale of Breaking Bad.

Highlights of the show included new versions of classic sketches like Celebrity Jeopardy and Wayne’s World and a new digital short from Andy Samberg and Adam Sandler. The only real underwhelming moment came when Eddie Murphy returned to the show for the first time in more than 30 years and then declined to perform any actual comedy.

Watch the SNL40 opening, featuring Jimmy Fallon and Justin Timberlake below, via NBC: