Morgan Freeman to Don Lemon: Race Has No Impact on Income Inequality 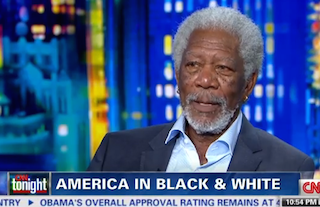 Actor Morgan Freeman is making the media rounds this week to promote his new series Through the Wormhole on the Science Channel. Tuesday night, he sat down for a chat with CNN’s Don Lemon that touched on the role that race does — or doesn’t — play when it comes to wealth distribution in America.

Morgan began by saying he thinks it’s a “great idea” that President Barack Obama and Democrats are drawing attention to income inequality. “We have a much more vibrant society when we don’t have such a vast chasm between the haves and have-nots,” he said. “Without a middle class, you’re not going to have consumers,” he added.

Asked by Lemon if race plays a role in wealth distribution, Freeman answered, “Today? No. You and I, we’re proof.”

“Why would race have anything to do with it?” he continued, “Put your mind to what you want to do and go for that. It’s kind of like religion to me, it’s a good excuse for not getting there.”

Lemon used the opportunity to say something he thought might get him “in trouble” about the prevalence of race in the stories he covers for CNN. “It seems like every single day I’m talking about race on television, because its in the news cycle, because it’s in the news,” he said. “But sometimes I just get so tired of talking about it, I want to just go, ‘this is over, can we move on?’”

“If you talk about it, it exists,” Freeman replied. “It’s not like it exists and we refuse to talk about it. Making it a bigger issue than it needs to be is the problem here.”

As for the question of race and inequality, the success of people like Freeman and Lemon notwithstanding, a sharp divide between whites and nonwhites does exist today, and by some measures has gotten worse. According to census data, in 1967 median household income for white, non-Hispanic households was 43% higher than it was for black households. But 2011, the divide had increased to 72%.

Things do not look any better when you measure household wealth as opposed to income. According to a Pew Research Center study, the white-to-black wealth ratio was 12-to-1 in 1984. And while it dropped to 5-to-1 in 1995, it jumped back up to a striking 19-to-1 by 2009.