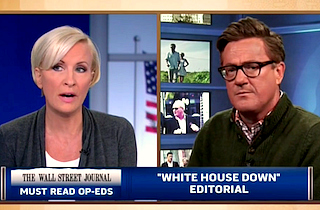 Morning Joe and Laura Ingraham have found something to agree on. Close the borders! No, actually it’s the suspicion that Secret Service Director Julia Pierson was hired out not for her qualifications but out of a need to “rebrand” the Secret Service following a high-profile incident with prostitutes, aka a desire for political cover via gender diversity.

“This is a delicate subject,” began MJ-regular Donny Deutsch, never a good start. “We need to be careful, though, that we are never ever throwing the baby out with the bath water as far as: the best person always has to get the job. As we go through her resume, you go: obviously, coming off the prostitute scandal, okay, yeah, women on top, good for the ‘brand,’ if you will. But the brand doesn’t work if it’s not competent. In positions of national security, quota second, competency first. It’s a delicate subject, but we’ve gotta talk about it.”

“I understand what donny is saying. after the prostitute scandal, somebody thought, hey, you know what, it would be really good for the Secret Service brand to have a woman running the place,” Joe Scarborough said. “Maybe she’s still there because of that, I don’t know.”

The panel then did what the MJ panel always does when it’s discussing gender issues: turned to Mika Brzezinski. Brzezinski brought up Pierson’s resume several times to the point that Scarborough asked if she’d found something fishy in it. Brzezinski said no, but added that it would be heavily scrutinized in the days to come.

“I really don’t know more than that,” Brzezinski said. “I know, though, that we have now like four or five stories surrounding the Secret Service, which has been under a cloud of scandal already, that really don’t bode well for the agency’s strength and our confidence in it as a whole, so we’ll ask these questions.”

See if you can can’t the number of times someone in this segment said “I don’t know” while condemning a civil servant.