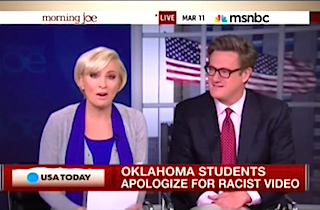 The concerned parents on Morning Joe found something to be outraged about over the video of SAE frat members engaged in a racist chant: namely the rapper Waka Flocka Flame’s decision not to perform for the fraternity, saying on CNN last night that he was “disgusted” by the video. (Waka Flocka Flame had performed for the frat the previous summer.) Co-host Mika Brzezinski thought Flame should take some responsibility, given that “nigger” appeared in his lyrics.

“Popular culture becomes a cesspool, a lot corporations profit off of it, and then people are surprised that some drunk 19-year-old kids repeat what they’ve been hearing,” said Bill Kristol. He added that Tipper Gore “tried to raise this issue, and was widely ridiculed,” referring to the parental advisory labels the future V-FLOTUS enacted after her daughter purchased Purple Rain thirty years ago.

“The kids that are buying hip hop or gangster rap, it’s a white audience, and they hear this over and over again,” Joe Scarborough said. “So do they hear this at home? Well, chances are good, no, they heard a lot of this from guys like this who are now acting shocked.” (Ahem.)

Thus are the white boys actually chanting the racist slogan exonerated, while the African-Americans who are disparaged in the chant blamed. Willie Geist, voice of reason and named as the panel’s in-house expert on gangsta rap, managed to fit in that language is contextual, and that an African-American rapper using “nigger” differs in both degree and kind from white frat boys at a southern university using it in a song about systemic discrimination that references lynching.

“There is a distinction between a bunch of white kids chanting about hanging someone from a tree, using that term,” Geist said, “and Waka Flocka Flame using it.”

“Well, of course there is,” Scarborough said, before going on to miss that very point. Watch the clip below, via MSNBC: