Morning Joe Bro Donnie Deutsch Said This Out Loud: ‘Donald Trump is a Feminist’
WAIT, WHAT? 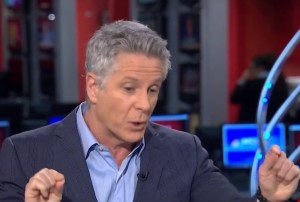 Things got off to a great start on Monday’s Morning Joe, as the dim sausagefest took on the fallout from that New York Times piece detailing allegations of Donald Trump‘s mistreatment of women. Minutes after Mark Halperin asserted that there was “nothing illegal” alleged in a piece that was shot through with allegations of sexual harassment and even sexual assault, fellow Morning Bro Donnie Deutsch contributed his own derpy secretions by asserting, out loud and with his mouth, that “Donald Trump is a feminist.”

Two other bonus things to watch for in this clip are Mark Halperin actually citing the workplace sexual harassment he just got done claiming wasn’t illegal, and Donnie Deutsch repeatedly copping to committing workplace harassment:

I have to tell you, I don’t want to be glib here. I was reading that and in many ways I was relating to it. Donald Trump is a feminist. I want to defend him. I want you to hear something. I ran a company and I was roguish in certain ways.

…Just like me, I ran a company and 9 of my 11 partners were women. I would say things in the workplace, but at the end of the day, it was a meritocracy, women would insult men, men would insult women. He’s an equal opportunity insulter. We can’t have feminism unless everything is on the table.

To be fair to Deutsch, he’s taking some if his cues from the New York Times piece itself, which described its own reporting as “a complex, at times contradictory portrait of a wealthy, well-known and provocative man and the women around him, one that defies simple categorization.”

The notion here is that on the one hand, Trump was (allegedly) a pig to women in the workplace, but on the other hand, he employed and promoted lots of women. Those things are not happening on separate hands, they are happening on the same hand. The women whom Trump mistreated and then elevated, either in business or in his personal life, are not rejoinders to the charge of sexism, they are evidence of it.

The entire point of abusing male power and privilege is to force women to go along with it, which is exactly what that New York Times piece describes, or to intimidate and terrify the ones who won’t, which is what doesn’t end up in that piece.