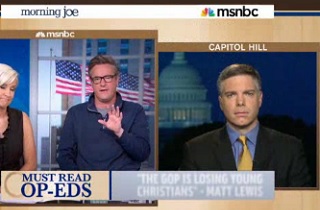 Tuesday morning, viewers of MSNBC’s Morning Joe were treated to a refreshing bit of candor about the jarring hypocrisy of conservatives who brag about their Christianity, even as they say the most vile things from behind the veil of Twitter. That candor went on second after second, until host Joe Scarborough and Daily Caller political commentator Matt Lewis employed that most Christian of practices, fraternal ocular splinter examination.

The segment was pegged to Matt’s recent column in The Week, which makes the case that politics is just too nasty for young Christians these days, and that “It wasn’t always this way. A couple decades ago, the Christian Coalition provided ground troops for the conservative movement.”

That’s a somewhat dubious premise, given what Republicans were doing a couple of decades ago, but quibbles with Matt’s rosy vision of the Republicans of yesteryear aside, this sort of introspection seems welcome. Host Joe Scarborough agreed with Lewis about the disconnect between modern politics and Christianity’s philosophical underpinnings. “I know you’ve seen it, but some of the harshest tweets, you go in and you look and they’ll go ‘Christian conservative,” Scarborough said, “and you look and then you just see this spewing of hatred. Well, that’s not exactly the type of guys and women that I grew up with at the First Baptist Church in Meridian, or in Pensacola, or anywhere else”

Right on, Joe. Sure, there are nasty pieces of work on either side, but if you’re going to tell somebody to stop fellating Kenyan President Odumbo, then don’t brag about how Christian you are.

Then came the needle scratch. “This win at all costs approach” Scarborough added, “just to be blunt, we always told ourselves that’s what liberals do.”

“The irony is, I think what’s happened is conservatives are aping the left,” Lewis agreed, trotting out leading conservative bogeyman Saul Alinsky, explaining, among other things, that “he wrote this book Rules for Radicals, he dedicated it to Lucifer.”

Actually, that’s not true, he dedicated it to his third wife, Irene. Maybe Matt missed the Bible’s ninth Rule for Radicals.

It’s a shame, because Scarborough goes on to make the excellent point that “There also is a conflict with massive cuts for the poor, and Matthew 25. There just is.”

The thing that conservatives never get around to explaining is why God would want individuals to help the poor and the sick, but not want governments to help them. Scarborough’s protest that “I don’t believe the federal government can do what churches and communities can do” is a convenient dodge, but there’s at least one group that disagrees with that: the churches.

Whatever your attitudes about government versus charitable assistance, though, it is absurd to blame liberals for the nastiness of Republican politics. Luckily, Morning Joe is on a liberal network, so there were definitely competing voices to challenge that premise. Unfortunately, their microphones appear to have malfunctioned.