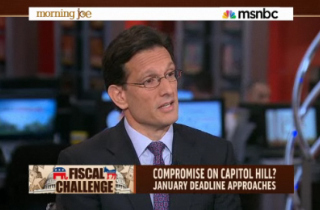 While appearing on MSNBC’s Morning Joe today, House Majority Leader Eric Cantor (R-VA) avoided directly answering host Mika Brzezinski‘s questions about whether he would be willing to break Grover Norquist‘s anti-tax pledge in order to reach a deal that avoids the impending “fiscal cliff” in January.

After Brzezinski introduced the anti-tax pledge to the conversation, Cantor responded: “A lot has been said about this pledge and I will tell you when I go to the constituents that re-elected me, it is not about that pledge, it really is about trying to solve problems. And as we know, this election we just went through is very much about, number one, what are we going to do to reclaim a momentum in this economy? How do we get us back to that? And, two, how do you solve a problem?”

Cantor continued, alluding to the party establishment’s willingness to explore increased tax revenues as an option: “And so if right now the question is how do you do that? Well, John Boehner went to the White House 10 days ago and said, ‘hey, Republicans in the House are willing to put revenues on the table.’ That was a big move, right? And we said we are going to do that in the name of trying to fix the problem to respond to the electorate that re-elected this president, but at the same time we say we weren’t elected to raise taxes. We want to help people get back it to work.”

But when Brzezinski attempted once more to get Cantor to say whether he stands with Sens. Saxby Chambliss (R-GA), Lindsey Graham (R-SC), Bob Corker (R-TN), and Rep. Peter King (R-NY) in willingness to violate Norquist’s pledge, the House Majority Leader replied: “I haven’t talked to Grover Norquist so I don’t know what he wants to do with his pledge. What I know is the constituents that I represent, and I believe most American people want to see, number one, more jobs created.”