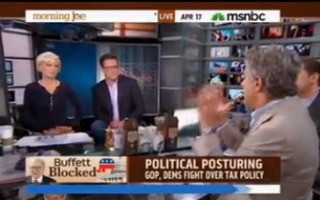 On Tuesday’s Morning Joe, host Joe Scarborough and panelist Donny Deutsch butted heads over whether presumptive GOP nominee Mitt Romney‘s wealth can be effectively used against him by President Barack Obama‘s re-election campaign. Scarborough thought that an attempt to do so would ultimately prove futile given that people simply aren’t jealous or resentful of success. Rather, the aspire to it.

“It’s not going to work,” Scarborough explained, “because I believe, and most people where I’m from believe, that you can still succeed in America and get rich in America even if you’re working class. And that sort of class resentment… It never played out in our house, even when my dad was unemployed. And, I’ve got to say, it still doesn’t play out in trailer parks across America, and I say that as somebody who in the summer went to visit my grandmom and stayed in the trailer.”

RELATED: Warren Buffett On Class Warfare: ‘If This Is A War, My Side Has The Nuclear Bomb’

What Scarborough characterized as resentment, however, Deutsch described as a sense that there was “unfairness.”

“I’m telling you,” Scarborough insisted, “where I’m from — I was born in Georgia, I lived in Tuscaloosa, I lived in Mississippi, I lived in Northwest Florida — that stuff doesn’t work.” Cries that Romney is “rich and evil,” he said, are simply attempts to win the progressive base.

To Scarborough’s point, panelist Steve Rattner noted that 12 percent of Americans believe themselves to be in the 1 percent, highlighting, he said, that we live in an aspirational society.

Mark Halperin sided with Deutsch, pointing out that such rhetoric ultimately 1) energizes the Democratic base, 2) puts pressure on Romney and forces him to admit mistakes, and 3) attempts to “smoke” Romney out on matters such as his taxes and spending choices, as well as putting pressure on him to present what, exactly, he’s for.

Scarborough, meanwhile, urged hypothetical candidates to “explain why he has a bathtub full of money” by pointing out and taking pride in his personal and financial successes. “We want people who are successful,” he said.

He then turned to Deutsch: “The thing that you don’t understand,” he said, “if you don’t mind me saying… Is that, at least we’re I’m from, Americans don’t trust big government. Right? They trust big business–”

“–If you let me finish, Ross Perot.” Scarborough continued. “They trust rich guys like Mitt Romney a hell of a lot more than they trust big government.”