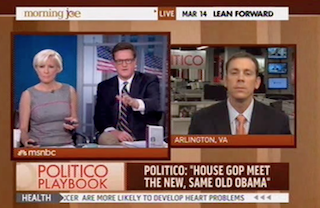 On Thursday, the Morning Joe panel took on the POLITICO report noting that, during their meeting yesterday, Republicans found out President Obama “looks and sounds the same behind closed doors as he does on TV.” While that sounds like it doesn’t bode well for a debt deal, not everyone at the table was really buying the story — with one panelist deeming it “not on the money.”

POLITICO’s Jim VandeHei summed it up thusly: The president wants tax increases and doesn’t want a bill with big changes to entitlements, while Republicans don’t want tax increases but do want significant entitlement reform. And “there’s not really a middle ground to be had.”

Joe Scarborough didn’t agree with the notion that the two sides, philosophically, are too far apart. “I know that people said that to you. “That’s just not true,” he asserted. “The president is coming to the Hill. Republicans are talking to the president.”

They’re in the preliminary stage, and they are negotiating, he added. The important aspect is the that Obama is not just talking to leaders, but also discussing with individual members.

The POLITICO report “is vastly oversimplified and is not on the money,” Carl Bernstein chimed in rather bluntly. Obama is a pragmatist, he argued, which means he wants revenue. But he wants entitlement reform “as much or more” as anybody. It’s not game over, he added: It’s only the beginning.

“The president really did talk all the time about needing to reform Medicare, Medicaid, Social Security. It’s what he ran on,” Scarborough said. And if the deal is big enough, Republicans will close loopholes.

“You guys are talking about a Congress that you wish you had versus a Congress that you actually have,” VandeHei challenged. In conversations with Republicans since the election, Scarborough later countered, they’ve asked: “Why do we want to continue to be seen as the party that protects billionaire, hedge fund brokers that usually give money to Democrats to pay 16 percent taxes?”

“When I hear people are paying 16 percent taxes, I resent them,” he added. “I think they should pay at least 30 percent taxes. And you know what? There are a lot of conservative Republicans that feel like I do.”

It’s still a “hell no” on raising taxes, he clarified, but yes to closing loopholes.