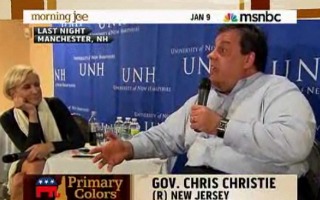 On Monday, the folks over at Morning Joe took a look at presidential hopeful Jon Huntsman‘s rising success in New Hampshire… even despite some people’s (like, say, New Jersey governor Chris Christie‘s) questioning of his loyalty and/or his integrity.

After noting that Huntsman had his “best moment in any debate” on Sunday, New York magazine’s John Heilemann recounted how Huntsman deftly responded to rival candidate Mitt Romney’s criticism of Huntsman’s service under the Obama administration with a two-prong hit: He insisted that he puts his country first, above any given administration or party, before pointing to Romney’s attitude as being detrimental and divisive.

Host Joe Scarborough wondered whether Huntsman’s response — that he’s doing this for his country, rather than simply for one party — would have played as well in any state other than New Hampshire. Panelist Mike Barnicle agreed that many in New Hampshire would simply like to see such attacks cease altogether. “The Romney camp slipped and fell,” he added, “when they continued that argument yesterday. It’s a non-winner for them.”

Moving back to Christie, host Mika Brzezinski introduced a clip from last night’s town hall meeting with the Governor, where he opined that he’d be “pissed” were he in Obama’s place and someone ostensibly “representing my administration” in China had been planning on running for president the entire time. “So,” he continued, “I wonder a little bit about Huntsman’s integrity.

Scarborough weighed in on the clip, opining that the line about integrity might have gathered applause in South Carolina or northwest Florida, but was met with complete silence by those in New Hampshire.