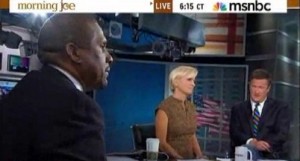 On Monday’s Morning Joe, panelist Tavis Smiley caused a minor uproar when he pointed out that a key difference between Presidents Barack Obama and George W. Bush is that “one of those guys lied to the American people.”

Host Joe Scarborough, guest Jon Meacham, and even Mika Brzezinski pushed back on the idea that Bush “lied,” laying the blame for bad WMD intel at the feet of CIA Director George Tenet, and Smiley eventually got lost in the semantic weeds.

Scarborough was trying to make the point that even opponents of both presidents ought to have the generosity of spirit to thank each of them for their service to the country. “we as one nation at some point need to step back and be able to say: thank you President Obama, thank you President Bush,” Scarborough said. “We haven’t had another attack since 9-11 in this country, and that just didn’t happen by coincidence.”

Smiley agreed, but added, “The reality is though that one of those guys lied to the American people. And when I say he lied, I mean his administration lied. When you want to talk about the security of this country, Joe, you cannot disconnect that, you can’t not dismiss the fact that he got us in a war that is now the longest-running war in this country.”

According to Scarborough, the blame for faulty intelligence rests, not with President Bush, but with CIA Director George Tenet’s waving arms. “So when George Tenet, the CIA Director, comes in to talk to him, and he says this is the evidence that he has weapons of mass destruction, and the President of the United States says to him, is this all you have? Is this the best evidence you have? Because this isn’t enough. And when you have the CIA Director standing up and waving his arms: Mr. President, it’s a slam dunk. They have weapons of mass destruction.”

Smiley and the panel get a little bit hung up on the difference between “lying” and “misleading,” but the fact is, whether Bush believed there were WMD is irrelevant; that he knew the evidence was weak, and that he and his administration oversold it anyway, is what’s relevant. I’m sure every cop who ever railroaded a suspect was sure the guy was “guilty of something,” and in fact, that’s the rationale that conservatives use to justify the failure to find WMD. Saddam was a bad guy, and the world is better off without him, so stuff your details up your spider-hole.

Beyond that, though, Smiley, et al, completely gloss over the fact that Bush and co. pushed the idea that Iraq was somehow involved in the 9/11 attacks, which turned out to be as reality-based as Saddam’s WMD.