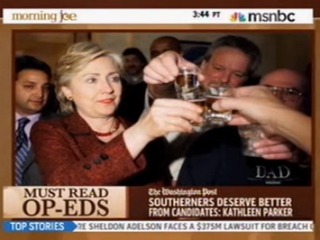 On Wednesday, Morning Joe host Mika Brzezinski took a look at Maureen Dowd‘s New York Times column. Could the discussion surrounding women and contraception open up a path for Hillary Clinton in ’16?

“The attempt by Republican men to wrestle American women back into chastity belts has not only breathed life into President Obama,” Dowd writes, “it has roused and riled Hillary. And that could turn out to be the most dangerous thing the wildly self-destructive GOP leaders have done… Women who assumed that electing Obama would life all minority boats are beginning to think: maybe he’s not enough. If the desire of these conservative male leaders to yoke women is this close to the surface, if they are perversely driven to debase women even though it could lead to their own political demise, then women may require more than Obama. If women are vulnerable, they may need one of their own.

“What are the odds this morning,” asked host Willie Geist, “that Hillary Clinton runs for president in 2016?” A thousand million percent, basically, was the general consensus, unless you take VP Joe Biden into consideration.

Brzezinski then read a portion of Kathleen Parker‘s Washington Post column, asking whether Mitt Romney would attempt to connect to a Jewish crowd by proclaiming “Oy vey, did I ever enjoy my loxies and bagels this morning!”

Why, Parker asked, can Romney not instead just try being himself instead of attempting to “get down with the people”?

Or why not try doing shots with voters, like Hillary Clinton once did, Brzezinski suggested before being reminded that, as a Mormon, Romney isn’t permitted to cultivate a hangover for the sake of a nice photo-op.