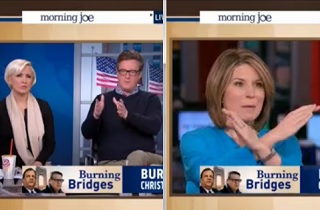 On Monday morning’s Morning Joe, co-hosts Joe Scarborough and Mika Brzezinski hosted New York Times reporter Kate Zernike, who broke the news Friday that David Wildstein had accused Governor Chris Christie (R-NJ), through an attorney, of knowing about the Bridgegate lane closures as they were going on. Along with GOP strategist Nicolle Wallace, they conducted a ten minute debate on whether Christie had ever claimed not to have known about the lane closures as they happened, and even laughed at Zernike and co-host Thomas Roberts as they introduced the facts.

In an earlier segment, the crew had just finished discussing the Wildstein revelations, and a memo that the Christie administration had put out in response, attacking Wildstein’s credibility. Brzezinski then brought in Zernike, and asked if Wildstein’s accusation was “worth immunity.”

“Big headline is Christie lied during that marathon two-hour press conference, where he insisted over and over he didn’t know anything about the lane closings until they were over,” Zernike said. That verifiable fact was a hilarious mystery to Scarborough, Brzezinske, and Wallace, who conducted a ten minute debate on whether Chistie had ever actually claimed not to know the lanes were closed while they were closed, even laughing at and mocking Zernike when she patiently explained that Christie had, in fact, claimed not to have known about the closures as they occurred, and shouting down Thomas Roberts when he tried to introduce some basic facts about the story.

Zernike corrected Scarborough, explaining that “Christie said earlier — he said two things. One, at one point, he said I didn’t know until — so the executive director of the Port Authority’s memo was leaked, which was October 1st,” and that “then in the press conference he said I didn’t know about the lanes closed until it was over.”

“Hold on a second,” Scsrborough interrupted. “I understand what you’re saying there. But I also know that Chris Christie has also said that he was told during the time that there was a traffic study going on. He said he was told after.”

For ten minutes, Zernike and Thomas Roberts patiently tried to explain that Christie had, indeed, claimed not to have known the lanes were closed until after they had already been reopened, only to be met with chuckling, mockery, and a chair dance from Wallace.

Of course, this is all easily verifiable through a modern invention called video playback, and if they didn’t have the tape, they could have played clips from Fox News, where Megyn Kelly clearly reported the contradiction between what Christie said at his press conference, and what Wildstein’s attorney is alleging, even if she, too, wondered why anyone would care if Christie lied.

There’s nothing wrong with having an opinion, or a point of view, but there is no excuse for not only having such a weak grasp of the facts, but failing even to attempt to verify those facts with something like, say, videotape. Ten wasted minutes debating something that could be cleared up with ten seconds of video, or a glance at a transcript.

It’s even worse than that, though, because even if they had played the video, and even if the Morning Joe Christie camp followers had tried to argue that there was some ambiguity in what Christie said at that press conference (which even Fox News didn’t try to do), they could have bothered to read the Christie administration memo that they had just been talking about. That memo, from Chris Christie’s office, said the following: “The Governor first learned lanes at the George Washington Bridge were even closed from press accounts after the fact.”