Morning Joe Diagnoses GOP’s Problem: ‘They Resent Everything’ And Need A Leader To Take On ‘The Crazies’
video

Morning Joe Diagnoses GOP’s Problem: ‘They Resent Everything’ And Need A Leader To Take On ‘The Crazies’ 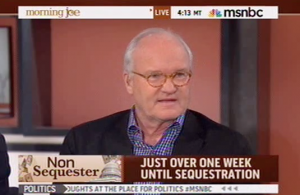 Morning Joe ventured into well-trodden territory on Thursday when they discussed the current state of the GOP and the type of leader the party needs to revitalize itself. One strong leader is all the party needs, the panel agreed. Specifically, one who’s unafraid of confronting members of the party who make outrageous remarks (a là Allen West).

“If I’m a Republican, I want everybody to run for president,” James Carville asserted, noting that someone needs to stand out after beating everyone else. But if congressional Republicans keeping “saying stuff, you’re just going to have your fist in your forehead every morning.”

Joe Scarborough didn’t disagree, pointing to the “TIME magazine theory” of politics. “Everybody talks about how the Republican Party’s in horrible shape — and they are in horrible shape,” he said, “but they need one strong leader.”

“When Allen West says there’s 78 communists, go, ‘Hey, idiot, shut up. No, they’re not,'” he added. “When you get a Republican president, they can do it.”

Yes, Carville concurred, “a leader to slap somebody back.” A leader to “turn out against the crazies in your own party,” Scarborough added.

But that’s not their only problem: Mike Barnicle zoned in on two others. First, he said, the party needs to realize that the talk radio audience “is not the country.” And secondly: “They resent everything. They resent immigrants, they resent gay marriage, they resent common-sense talk. The resentment factor is so thick among some Republicans.”