As we have seen in the past, the Morning Joe crew had a lot to say about last night’s MTV VMAs this morning, from Kanye West’s totally sincere announcement of a 2020 presidential run to the scantily-clad spectacle that was host Miley Cyrus.

But things really heated up when Mika Brzezinski started talking about how Miley Cyrus has “jumped the” something and put this photo on the screen: 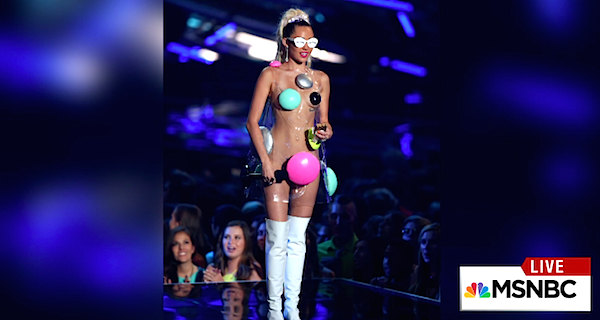 “Oh, that’s just gross,” Scarborough said. “Oh my God, I would rather see Hugh Hewitt in that than Miley Cyrus. That is just repulsive.”

“Put it back up, scare the children. Because children should be scared,” Brzezinski said after the photo had come down. “I think young people are actually kind of grossed out, horrified by what she’s doing,” she insisted, without much evidence to back it up.