Morning Joe Gangs Up On Pat Buchanan: GOP ‘Elected To Govern’ Not To Oppose Taxes 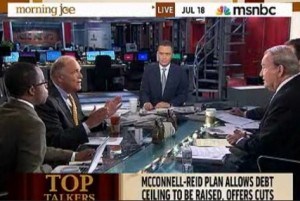 MSNBC’s Pat Buchanan attempted to justify the Republican position of not accepting a debt compromise with President Obama by suggesting that the last Republican to go along with such a deal was President George H.W. Bush and his reward for raising taxes was one term. Yet none of the other Morning Joe guests in the discussion including MSNBC contributors Ed Rendell, Harold Ford Jr., Mike Barnicle and Jonathan Capehart were buying Buchanan’s argument that Republicans were taking a “principled position.”

Ford and Rendell, in particular, highlighted that Republicans passed up on a really “good deal” as Rendell stated:

“Republicans should have raised the victory flag, taken the deal Harold said. It was 3 to 1 spending cuts to revenue increases. . . . Most importantly, it’s good for the country.”

Buchanan responded “well then you’re telling me that these guys are standing up against a popular position for their principles and that’s what they were sent to Washington to do.” Rendell got visibly angry, and informed Buchanan that actually Republicans “were sent to Washington to govern [and that’s] a big difference, you get elected to govern.” Ford piled on Buchanan too:

“What were Republicans in Congress elected to do? Not govern, but to come in to be antagonistic, to be divisive and to be problematic?”

Ford described the philosophy of being opposed to any revenue increase from the wealthy to be an “indefensible position” from the Republican party. And although the conversation was getting a little heated, Barnicle took on Republican Senator Marco Rubio with a bit of humor as he dismissed Rubio’s argument that debt is the main problem right now. “Guess what the problem here is: nobody’s working,” Barnicle continued, “take a walk around the block Marco.”