Morning Joe Gets It Wrong in Rehashing of ‘Penn State Scandal’ 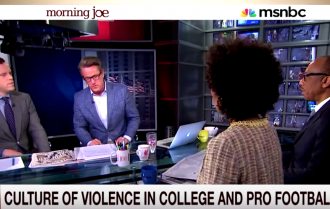 For over three years I have spent a huge amount of time and effort investigating the so-called “Penn State Scandal.” I have done so for no money and with no connection to the university. I probably now know as much or more about it than anyone on the planet, including Jerry Sandusky himself. I have appeared in two major Today Show interviews with Matt Lauer to discuss my findings. In short, the media coverage of that story has been the most biased and ignorant of any with which I am familiar.

I thought I had become immune to the media’s abject ignorance of the story (it appears they all stopped paying attention after the narrative was set three days into the story back in November of 2011), but I feel compelled to comment on a discussion of it on Tuesday’s edition of Morning Joe. The MSNBC roundtable show delved into the topic while on the subject of a “culture of violence” in college football and, for someone who knows the actual facts, it was like watching a bunch of five-year-olds talk about Santa Claus.

Here are just a few of the key quotes from the segment related to the Penn State story, all based on the premise that the school knew Sandusky was molesting boys and purposely ignored (or worse) it to protect the sacred football program and the retired assistant coach (relevant portion begins ~5:10 into video below):

Willie Geist: “Someone knew about this. Can you think of anything more horrific than that?!”

Scarborough: On that “someone” (former PSU assistant coach Mike McQueary) not going to police or at least beating up Sandusky: “Who would not do that?!”

This last statement was the only remotely accurate one in the entire subject. It is indeed “unbelievable” that a young, tall, muscular former quarterback saw an old man naked man raping a boy in a shower and simply walked away only to tell his father and later his boss (Paterno). It is so “unbelievable” that it is amazing to me that anyone still believes it ever happened, even after a mountain of evidence has accumulated to show that it never did.

Here are the key facts about the infamous “Mike McQueary Episode,” which the news media has systematically ignored because they contradict a narrative with which they fell in love back in 2011 (you can think of this as much like “Hands Up, Don’t Shoot!”):

It seems very obvious to me that the far more likely scenario for what really happened here is vastly different from the narrative which the media mindlessly adopted overnight because it irresistibly suited their purposes.

McQueary clearly never really thought he saw a sex act until after he was told by law enforcement ten years later that they believed Sandusky was a pedophile. An episode he always thought of as weird (which an old man showering naked alone at night with a boy obviously was, even in the pre-Catholic Church scandal era) was transformed into something far more sinister as he tried to help investigators desperate for their first witness after two years of fruitless searching.

As for Paterno, I strongly believe his disgraceful treatment is the most nonsensical injustice ever done to a legendary figure. It is obvious to people who have actually studied the case that if Paterno had not testified to the grand jury that McQueary had told him of something “sexual in nature,” that Sandusky never even gets arrested. This is how weak — contrary to public perception — the case against Sandusky was after two years of investigation.

The reality is we know now that Paterno had done at least two formal interviews before that ill-fated testimony where he said absolutely nothing of the word “sex.” It seems more than probable that the elderly Paterno was fed that word by over-eager prosecutors just before his testimony, a theory his son/lawyer, who was there, has recently corroborated. The idea that his 61-year exemplary career was (seemingly forever) destroyed because of a couple of inaccurate words he used in an effort to help the prosecution of a man he never even liked, is totally mind-blowing but also indicative of this entire crazy case.

Elsewhere in the same Morning Joe program, Scarborough and panelist Eugene Robinson somehow compare revelations of Bill Cosby’s 2005 deposition to Paterno’s supposedly having been exposed as someone totally different than the adored public figure. They both agreed that Paterno had turned a “blind eye” to Sandusky’s crime.

This absurd analogy fails at every possible level. The only remotely legitimate comparison here would be between Cosby and Sandusky, as both men are accused of horrible crimes for which there is no evidence other than the very late claims from victims with possible financial motives (to be clear, I am not saying that Cosby is guilty or innocent, just that the cases are quite similar in that regard).

The most important takeaway here is that reality is almost always far more complicated than a news media now extremely ill-equipped to handle nuanced stories would like to pretend that it is. The true story of the “Penn State Scandal” is the greatest story never really told. I have known for a long time that my quest for the truth of this matter would fail in the realm of media and public perception, but that doesn’t change what the obvious truth actually is.