Morning Joe Grills Republican Senator: Is The GOP ‘Dancing On The Grave’ Of Obamacare? 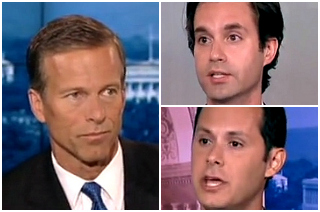 John Thune, a GOP Senator from South Dakota and one-timed rumored candidate for Mitt Romney’s running mate, appeared on Monring Joe Thursday morning to answer charges that the GOP was obstructing the implementation of Obamacare and even “dancing on the grave” of the health care bill’s failure.

“At some point, you have to recognize the law of the land is the law of the land,” said Sam Stein of the Huffington Post, and then cited the GOP’s opposition to using the NFL to publicize information about the law. “It seems to me, from the big macro perspective, that the Republicans are, by and large, trying to hurt the implementation of the law, then turning around and saying the law’s not working.”

“Our view is anything we can do to delay the implementation of this, to insulate people from the impacts of this, is a good thing,” Thune said. “If they’re going to come out and delay the implementation of a major, key component, our argument is ‘Let’s delay this thing, and let’s get to a point, hopefully in a future congress, maybe a future presidency, where we can do this the right way.'”

New York Times writer Jeremy Peters jumped in on this point: “One of the things that I hear so many Republican colleagues slightly concerned about, is that while a lot of you were thrilled to hear that this president was delaying a key part of this, you risk sounding like ‘I told you so,’ if you say, ‘This is failing, see, we knew all along.’ I wonder if you’re concerned you might be dancing on the grave a little bit too gleefully.”

“We’re responding to where the public is on this. If you look at the public opinion polls, people are still very sour on this idea,” Thune said. He then reminded the panel: “Most of us voted against it, so being naysayers about it and suggesting in its implementation it’s going to be very difficult, I don’t think is anything we haven’t said before.”