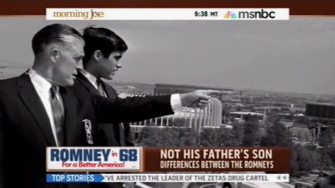 On Monday’s edition of Morning Joe, New York Magazine contributing editor Benjamin Wallace-Wells discussed his new article on the lessons Mitt Romney learned from his father George’s failed 1968 Republican primary campaign. Wells posited that, in some ways, the current presumptive Republican nominee is more like Richard Nixon than George Romney, especially in how he has handled the current rightward shift in the conservative base.

At the time of the Nixon vs. Romney 1968 primary campaign, the conservative base of the party had also experienced a bit of an uprising. Wallace-Wells said that Republican presidential nominees since then have learned that in order to win, you must “be more like Richard Nixon.” Wallace-Wells explains that this is because the elder Romney’s response to a conservative tide was “to grow sort of more righteously progressive, and to become more pro-civil rights, to denounce the cult of rugged individualism as a cover for greed,” while the successful candidate Nixon “figure[d] out ways to fold elements of his own persona into things that the conservative base believe[d].”

“And I think you can see some of the similar habits with Mitt Romney,” Wallace-Wells explained, and continued on to say that “the example of his own father’s run in 1968 is sort of a sample of what not to do.”

Panelist John Meacham later asked Wallace-Wells about how Nixon was “someone who won one way and governed – at least on domestic and some foreign policy – differently. To what extend do you see the possibility that Mitt Romney may be that Nixon?”

Wallace-Wells replied that during a Romney presidency, more so than any other candidate, “Who runs Congress is going to be determinative. If you have two conservative houses of Congress, you can see easily see Romney taking a very conservative direction in his presidency. If you have as he had in Massachusetts, a fairly liberal Democratic-run Congress, you can see him doing the same things he did in Massachusetts, governing as a genuine moderate pragmatist.”

Check out the full segment below, via MSNBC: