Morning Joe Guest: Mormonism Represents ‘What Americans Like To Believe About Themselves’ 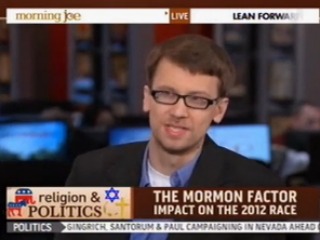 Matthew Bowman, author of The Mormon People: The Making of an American Faith, stopped by the set of Morning Joe Friday to discuss a faith that — thanks to Mitt Romney, Jon Huntsman and such pop culture phenomena as the “Book of Mormon” musical — has found itself increasingly part of the national discussion.

Bowman sought to address certain misconceptions about the religion, including the fact that many in the country refer to Mormonism as a cult. “It’s really a pejorative,” he explained. “It’s a political rather than a social logical or academic word. Mormonism simply is a new religion.”

RELATED: Chris Wallace Asks Romney If His Donations To Mormon Church Will Be A Problem In Presidential Race

Host Mika Brzezinski asked about an issue a lot of people tend to have about Mormonism: Where does it stand on polygamy? Bowman responded by referring to plural marriage as a “radical marital practice” that is “rooted in how Mormons understand the notion of community.” For Mormons, he added, marriage is a relationship that lasts for eternity and that Heaven is, essentially, a network of families.

And, then, another big question: Is there something “weird” about Mormonism? Is it weirder than any other major religion? Bowman responded by drawing a comparison between criticisms and fears aimed at Mormonism to those made about other religions throughout history. “It’s not weirder,” he said. “It’s simply newer. People have accused Catholicism of being a cult, people have accused Judaism of being a cult. These are words that were attached to religions that are really in the mainstream of American life today for hundreds of years in the United States. And Mormonism, I think, is about 70 years behind Catholicism.” He noted that, while it’s conceivable that many people’s issues with the faith might stem from its historical embrace of polygamy, “many of the accusations thrown at Mormonism are quite similar to those thrown at Catholicism. They have a hierarchy. There is some spiritual leader who tells them what to do and they all obey it. They have odd rituals. Strange ideologies. These are all things things that Protestants said about Catholics when John F. Kennedy ran for president.”

Panelist Jon Meacham, who edited the book, had an interesting question: As a religion that is native to American, what does it tell us about the United States?

Mormonism expresses a lot of what Americans like to believe about themselves. Mormonism was an amateur religion. It was a religion founded by people who had no training in a religious theology or organization or anything like that. Mormonism is a religion that’s still very legal egalitarian. It is a religion that’s very optimistic about human potential and human possibility. All of these are things that really express what Americans like to believe about themselves. At the same time, however, Mormonism has a lot of characteristics that Americans are wary of and leery of, like this issue of hierarchy, like violations of traditional marital practices. Secrecy as well, yeah. You cannot be a secretive faith and be in the American public sphere. Americans will just not tolerate that.

Also interesting are Bowman’s analysis of how and why Mormons looked to American corporations and culture for how to, essentially, “brand” themselves as a people.

And, if there’s anything we can take away from this segment, it’s this: The panel agreed that Jon Meacham, clean-cut and wholesome as he is, would make a kick-ass Mormon.