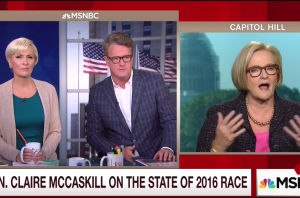 A fifteen-minute Morning Joe interview with Clinton surrogate and Democratic Missouri Senator Claire McCaskill was quickly derailed when she immediately accused the show of being biased against Hillary Clinton.

McCaskill didn’t waste any time going after host Joe Scarborough. “Joe, I thought you were going to have me in to talk about Jeb Bush’s flip-flop on immigration. …Pathway to citizenship. He used to favor it, now he’s against it. I wonder why?”

“I don’t know,” he said. “Why do you think Claire, since you’ve obviously you’ve come loaded for bear? Go ahead.”

“I’ve been listening to you guys this morning,” she said. “And I think some of it has been unfair and not balanced. And you look at Marco Rubio, you look at Jeb Bush and the changing in their position to twist and distort themselves to appeal to the same people who want to elect Donald Trump for president.”

But the hosts bristled at that. “Well, I think certainly over the past several months, nobody in Marco Rubio’s camp would suggest I’ve taken it too easy on Marco for his flip-flops,” Scarborough said. “I’ve said it. I’ve said I’m a lawyer, I’ve spent hundreds of hours digging through case law and depositions, and I still can’t tell you what Marco’s exceptions are on abortion.”

The conversation returned to civil levels, but McCaskill made the point again when Scarborough pressed her on Clinton’s flip-flops on Keystone and TPP. “I just wish we could have the same kind of time talking about some of the distortions and the pretzel-like behavior of the some of the candidates in the Republican primary that you guys spend on Hillary. It’s ridiculous.”

Scarborough promised to press Jeb on the issue next time he came on the show, but pointed out that at least he would come on the show. “While you were supporting Barack Obama in 2008, we were the only people on this network who were fair to Hillary Clinton,” he noted. “We’re tough on everybody. My God, have you heard what we said about Kevin McCarthy this morning? Have you heard what we’ve been saying about Ben Carson?”

The interview again returned to barely restrained hostility and passive-aggressive sniping back and forth. “The one thing you guys won’t have to worry about is if I’ll ever come on here again and say exactly what I’m thinking,” McCaskill said towards to end. “At least we established that today.”