Morning Joe: ‘Is The Romney Campaign Too Immature?’
Video

Morning Joe: ‘Is The Romney Campaign Too Immature?’ 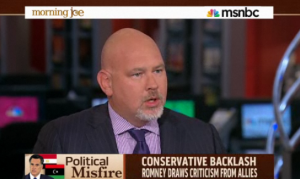 Is the Romney campaign simply too “immature”? This was the question posed to Republican strategist Steve Schmidt on Thursday’s Morning Joe.

Schmidt thinks the Romney campaign began to react to the “Republican conservative commentariat” going into a “panic” over the weekend and is, as such, beginning to make mistakes under all the pressure.

“How serious,” asked host Joe Scarborough, “was the mistake he made yesterday, attacking Barack Obama based on faulty information the same day we find out that the first U.S. ambassador since 1979 is murdered overseas?”

“Look, I think it was a big mistake,” said Schmidt. “I think it was a very serious mistake. And it was because we’re at the point of the campaign now where these impressions start to harden into concrete. People are evaluating now on a daily basis who has what it takes to be the next president in a challenging time. Who has the right temperament? Who has the right character? And he fell short on that with that statement.”

Mika Brzezinski admitted to cringing over the idea that Romney has “now put himself in a box with someone who has absolutely no discipline” — that someone being Sarah Palin.

Scarborough further compared this Republican campaign to 2008’s by noting that McCain lost steam and support around the same time. “Impressions like this can stick,” he said. “If Mitt Romney looks craven, if he looks desperate, if he looks like he’s not ready for primetime, that impression can stick through the fall.” He later — echoing some of the points that caused so many fellow conservatives to “panic,” as Schmidt had put it, over the weekend — said it was “maddening” that Romney isn’t doing better considering Obama’s spending.