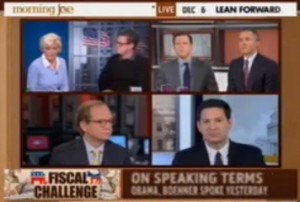 It may seem as though President Obama could scarcely be in a better position with regard to the ongoing fiscal cliff negotiations, with the wind of an ever-widening reelection victory at his back, public opinion overwhelmingly in favor of his proposals, a deadline that will automatically enact a key provision of his plan, and an approval rating that’s at a three-year high, but not so fast. On Thursday morning’s Morning Joe, host Joe Scarborough led his panel to the conclusion that President Obama had better play ball with Republicans, lest he face the wrath of creatures more fearsome than voters, or even the odd Kraken: HISTORIANS!!!

Co-host Mika Brzezinski brought up the h-word, telling the panel that “the President did a lot of things that made the business community very angry, and I’m not sure they’re all bad, adding that “I just think history might look back at what he’s done in quite a positive way.”

Former Obama car czar and Morning Joe regular Steve Rattner set the table for Scarborough, saying “This issue will be the defining issue of his second term,” that the President “wants to get it right,” and that “Obama’s got a little bit of an edge right now in this game.”

Scarborough acknowledged the President’s strong position in the polls, but noted that “the President could stiff-arm the GOP, and he would win politically, but as you said, this is the issue of his second term. This defines his second term. And if he is defined as a guy that can’t find the middle ground, that at the end of the day can’t strike the deal, historians aren’t going to go after Eric Cantor.”

After laying down the correct historical marker earlier in the segment, Mika said “Right.”

“They’re going to remember Barack Obama,” Scarborough continued, “as a man who couldn’t follow through on his grand promise of 2004 and 2008. So yeah, he could win politically, but the costs, don’t you agree, would be tremendous, not only to him, but to the economy and to our country.”

“Well, I agree,” Rattner said, while getting Scarborough to allow that “Republicans have to meet in the middle.”

That’s one way to look at it. Then again, historians might look back and see, as Scarborough alluded to later in the segment, that President Obama endured, and overcame, four years of an intransigent, and often deranged, opposition that made it clear, even in defeat, they were more interested in protecting rich people’s tax rates than in the well-being of the U.S. economy. Are there any historians who look back and wonder why Abraham Lincoln didn’t play nicer with the South, and just sign an Emancipation Recommendation?

Obviously, there is some give built into President Obama’s fiscal cliff proposal, but there is absolutely no evidence to suggest that anyone will ever think that he should move halfway toward ideas that nobody likes, that won’t work, and that will hurt millions of Americans, no matter how badly Joe Scarborough wants there to be. Historians will most likely look back and see whether President Obama did what was best for the country, which does not include adopting a plan that the people just got done voting down.

That’s no reason for Scarborough to give up trying, though, and this is just another textbook example of how the most influential conservative in cable news helps his side Win The Morning™. He gets an ostensibly bipartisan panel to agree to a reasonable-sounding premise that benefits conservatives, and hopefully sets the narrative for his influential audience of politicians and DC media elites. It’s an effective formula that makes Joe Scarborough worth his weight in gold to conservatives, even if they don’t always appreciate it.