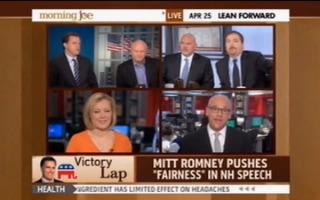 On Wednesday’s Morning Joe, the panel discuss the Obama re-election campaign’s efforts to somehow paint presumptive GOP nominee Mitt Romney as being both a “flip flopping phony” and a “right-wing nut,” as panelist John Heilemann so colorfully put it.

The interesting thing that’s happened in the last week, I think, is the way in which the Obama campaign has shifted away from the consistent argument that they’ve made over the course of the last year, really, about Mitt Romney, which is that he is a flip flopping phony, away from that argument to the argument he is a right-wing nut. And, you know, with David Plouffe coming out and saying that he is the most radical conservative since Barry Goldwater. You can’t kind of have it both ways. Barry Goldwater was not a flip flopping phony. And so, if you’re going to say that Romney is a flip flopping phony, you can’t say that he’s a hard right conservative.

I think they are shifting in that direction and that is, I think, part of their trying to adapt to a new environment where they think Romney might be able to get to the middle, and they want to try and keep him over there on the far right.

“But, you know, you guys did this to Kerry in ’04,” Chuck Todd pointed out to GOP strategist Steve Schmidt, referring to the onslaught of criticism former Democratic presidential hopeful John Kerry received on his “waffling” and “flip flopping” while also being painted by the GOP as a hard liberal.

Schmidt confirmed that this had indeed been a calculated, strategic effort but added that, where Romney is concerned, “there’s just not a lot of gold in those hills,” because he doesn’t “scream radical conservative.”

“It’s going to be very tough to make an ideological case against him,” he added.

Mike Barnicle wondered whether the focus of this campaign may be shifting away from ideology and towards competence, with Romney, for instance saying that the President is a “nice guy,” but just isn’t up to task.

“He is not a natural politician in the way that you saw the President, you know, as he was slow jamming the news,” said Schidmt, referring to the “Preezy’s” appearance on Late Night. “He’s not going to be able to do that. he was a businessman making a business case yesterday.” The Romney brand, he continued, is instead built on “achievement and excellence and competence.”