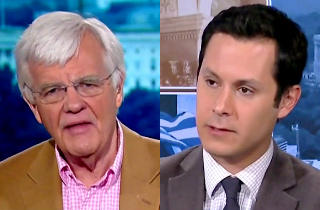 Following the loss of Democrat Alex Sink in the Florida special election Tuesday, Bloomberg columnist Al Hunt and Huffington Post political correspondent Sam Stein diagnosed the intensity gap between opponents and supporters of the Affordable Care Act, arguing that the issue could become similar to that of gun control, in which highly motivated opponents turn out to the polls while the issue gains in popular support that doesn’t drive elections.

“Actually, the poll numbers have gotten a bit better on Obamacare,” Hunt said. “But it’s the intensity factor. Those people, that one-third of the country that still adamantly wants to repeal Obamacare, they’re turning out. The trick for the Democrats is to somehow energize those others in a non-presidential year. That’s a tough task.”

“The Bloomberg poll is actually now the third in a row that has seen a small improvement in the favorability numbers for the Affordable Care Act,” Stein said. “The law is getting a little bit more popular. But as you know, rightfully, the motivating factor for a lot of people is they oppose it. They want to come out and show their opposition.”

“You equated it to gun control,” Stein continued. “I think that’s a very apt comparison. It’s going to be a motivating factor for the people who hate the law. It’s going bring them out. And Democrats need to find out a way to motivate their base, and it has to be probably outside of Obamacare at this juncture.”