On Morning Joe on Tuesday, the new weekly Gallup poll approval ratings for President Donald Trump provoked analysis of his base as well as what the poll reveals regarding the upcoming midterm elections and even today’s Ohio special election. It was not good news for Republicans, they concluded.

Mika Brzezinski began by presenting the numbers (screenshot below). “It finds that 54% disapprove of the job President Trump is doing, compared to 41% who approve of his performance,” she said.

“CNBC’s John Harwood analyzed the source of Trump’s support and found in the data that whites with no college degree approved of the president’s job 58% to 39%, while 29% of all other than Americans approved, 66% disapprove,” she continued. “So Joe, the numbers seem to be shifting just a bit for the president.” 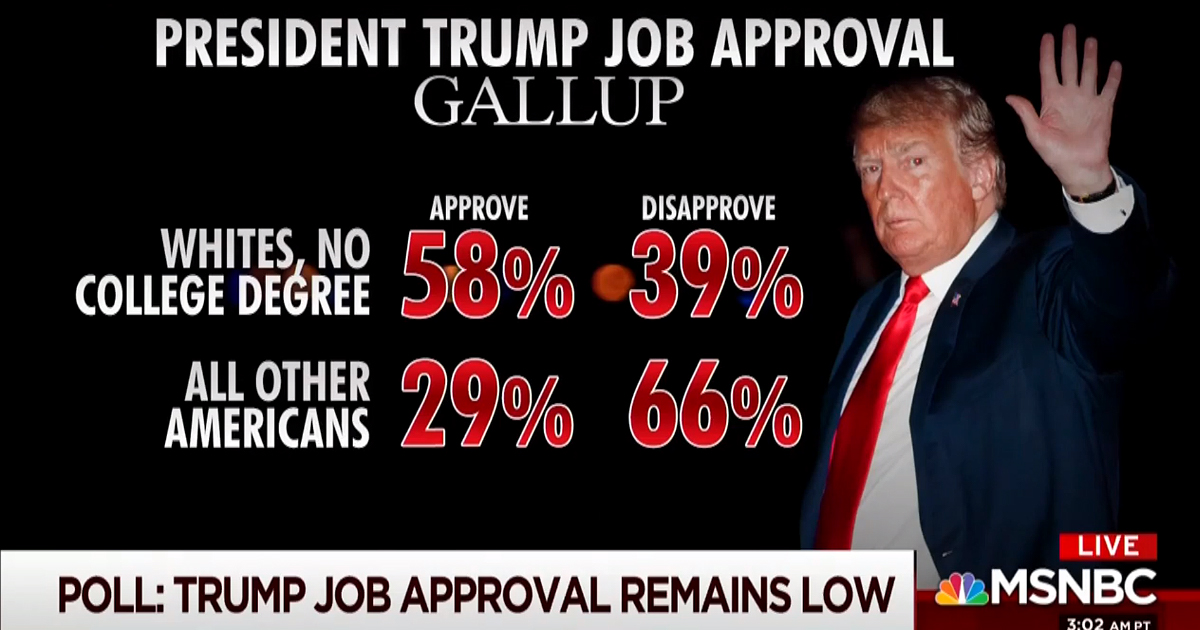 Joe Scarborough said that this shows “about as narrow casting as it gets” when it comes to the base of Trump’s support. He added that if the party hopes to overcome in votes like the Ohio special election, this “small slice of the electorate” will need a big turnout.

“Because, I mean, Donald Trump is sacrificing just about every other group in America for this one group of white, non-college educated voters,” he said. “There just aren’t enough to get him over the top, or to get his candidates over the top in a lot of elections.”

The Washington Post‘s Eugene Robinson pointed out the problem GOP candidates face, with Trump’s near-total popular support in the Republican party, making it very difficult to run away from him in a primary, and is increasing unpopularity with other voters, making it difficult in a general election.

“We shouldn’t be talking about this Ohio election,” he said. “This is a safe Republican seat, and we’re talking about it because it’s a Trumpy-backed candidate who is up against a democrat who is a moderate who could win.”

Mike Barnicle and Robinson go more into the analysis of the Trump voter demographic in question, saying that they are “victims of a con” that takes advantage of them by convincing them the media is the biggest problem they face, and making promises that won’t be kept, and exploring racial division.

“It’s a demagogue’s toolkit,” said Robinson. “And he uses it effectively.”

Watch the clip above, courtesy of MSNBC