Morning Joe On Romney Vs. ‘Celeb’ Obama: ‘Vanilla Is The New Black’
Video

Morning Joe On Romney Vs. ‘Celeb’ Obama: ‘Vanilla Is The New Black’ 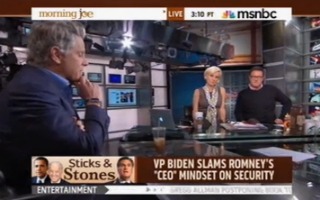 On Friday, the folks at Morning Joe took a look at Vice President Joe Biden‘s recent jabs at Mitt Romney‘s foreign policy experience, contrasting Biden’s criticism to that surrounding then-candidate Barack Obama four years ago, and comparing Romney to Obama in terms of their “cool factor.”

Speaking at NYU Thursday, Biden said that the Romney campaign was betting on the “collective amnesia” of the American people and attempted to paint Romney as being, essentially, a businessman with a “profound misunderstanding” of the responsibilities of a president and who, without foreign policy experience, can only be judged on his rhetoric.

“Well, no, I’m talking about at the time,” Scarborough clarified, “He’s trying to say that a guy with Mitt Romney’s experience is going to have to sub it out to the State Department? It’s a really tough sell. And in fact, I think you talk about silly season, the fact is Mitt Romney’s being, I think, silly trying to sell Barack Obama as weak on national security. That’s just like the White House trying to sell Romney as this right-wing conservative. These people are trying to paint their opponents into corners that they are just not going to be cornered.”

“The Obama people are trying to paint Mitt Romney as this wild-eyed radical,” Scarborough continued. “He’s not. He’s just not.”

“And now the Obama team is trying to paint Romney as an inexperienced neophyte,” he added. “It seems like they’re both missing their target.”

Panelist Donny Deutsch, meanwhile, felt the Romney campaign can effectively use one major differences between Romney and Obama to its favor:

The new ad that just came out, the kind of celebrity ad, the Obama celebrity ad, that basically if you kind of say, they’re going to paint him here, and particularly going forward Romney takes Portman, and we are the competency. Vanilla is the new black. I mean, boring is good. When you hire turn-around experts, if I showed you the profile of every turn-around expert that’s ever been hired for every every company, they are the most vanilla, boring, safe. So I found that latest Rove ad a very, very compelling ad, you know, which would show the Fallon rap and all of the celebrity. And now you take what was a perceived weakness of Romney, his blandness, his boringness [and make it a strength].