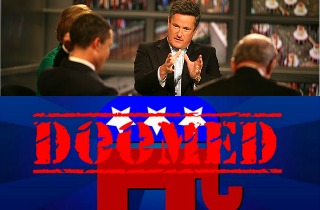 The regular guests on MSNBC’s Morning Joe are in perfect agreement: the Republican Party is walking into a trap of its own making. The internecine feud within the GOP over whether to pursue a strategy of defunding the Affordable Care Act in the political fight over a continuing resolution to fund the government is, in the eyes of Morning Joe’s guests, a self-inflicted wound from which the GOP may never recover. Sure, the panel guests on Washington D.C.’s favorite morning show have predicted the imminent demise of the Republican Party in the past, but this time it’s different.

On Thursday, former Republican strategist and John McCain campaign veteran Nicole Wallace summoned every ounce of condescension in her power when she criticized the pro-defund Republicans by equating them with young children eager to run directly into oncoming traffic.

“When Republicans run into the street, despite the fact that there is a flashing red light, they will get hit by the cars and killed,” Wallace observed. “So, this is stupid politically.”

“We’re actually at a moment as Republicans where even Bernie Sanders has described our party has on the offense, and now we’ll let our party run into moving traffic against a red light? It’s idiotic,” she concluded.

Wallace is not incorrect. If the debate over defunding the ACA results in, as it potentially could, a government shutdown, every indication is that this would be a disastrous eventuality for the GOP. The Republicans in Congress know this as do Democrats and the White House. That fact indicates that cooler heads will prevail once the posturing is out of the way.

But Wallace’s hyperbolic assessment of the GOP’s political prospects in the wake of this fight is both theatrical and predictable. In fact, declaring that the GOP is doomed is a favored Morning Joe pastime.

The Conservative Political Action Conference (CPAC), what the crew on MSNBC took to calling the “Star Wars bar scene,” was a leading indicator that the GOP was doomed. The conference’s decision not to invite New Jersey Gov. Chris Christie in favor of former GOP stars like Mitt Romney and Sarah Palin demonstrated for Joe Scarborough just how doomed the GOP was.

“It underlines how little they care about electoral victories,” Scarborough exclaimed. “They have a coalition that cares about talk radio ratings and understand you have to say extreme things to get those talk radio ratings.”

“Maybe some of these right-wing lunatics on the air are right,” he continued. “Because apparently these days being a Republican is not about winning. So, maybe I should call myself a Republican In Name Only.”

In spite of it’s relative popularity nationally, the House Republicans’ embrace of a bill that would have banned abortions in the country after 20 weeks of gestation has also consigned the GOP to history’s trash bin.

“We are so undermined by so many of the shrillest voices in our own party,” Scarborough agreed. “That has nothing to do with conservatism.”

“Before I pass away, I would like to have a Republican in the White House again,” he added after wondering who in the GOP would “tell the idiots out there to just shut up.”

“The notion that we’re going to be the all-white party is just a sad, sad state of affairs for the party of Lincoln, and the Party of Reagan that won 49 states,” opined McCain camp veteran Steve Schmidt, a Republican operative of such steely conviction that he is presently consulting for an issue advocacy campaign associated with the gubernatorial bid of Christie’s genuinely doomed Democratic opponent.

But what has inspired the most emotion from Morning Joe’s regular panel of Cassandras is the months-long debate over new gun control laws.

“As the party of glocks,” Scarborough warned, “we will lose.”

“If they want to go around and debate that for the next four years, good luck,” he said on December 18, days after the horrific massacre in Newtown, Connecticut.

On March 22, Scarborough warned that Senate Republicans who do not support Majority Leader Harry Reid’s sweeping gun control legislation would jeopardize their careers and those future candidates hapless enough to attempt to run on the Republican ticket in 2014.

By April 8, the MSNBC host was predicting that the GOP would cave and withdraw their opposition to new gun laws in order to remain a viable political party. “I can’t believe those Republicans are going to allow the entire Republican Party to be the party that basically put rapists’ rights over parents’ rights to keep their kids safe when they go to school,” he added.

“Is anybody awake in my party?” Scarborough exclaimed with exasperation the next day when it was clear the GOP was holding firm with their opposition to new gun laws.

“This party is moving toward extinction,” the MSNBC host asserted the day after the upper chamber of Congress failed to pass Reid’s preferred gun control bill with the assistance of a handful of Senate Democrats.

“They will likely hold on to the House of Representatives in 2014, they may even make gains in the Senate in 2014. But they continue to do themselves long-term damage at the level of a national party because of the fact that 88 percent of people are in favor of this bill,” insisted The New Yorker’s John Heilemann on May 2.

This is convenient. While the Morning Joe crew’s predictions of the GOP’s imminent demise may not materialize for years, eventually their forecast will – indeed, must – come true. This shift is taking place on a glacial timescale and is observable only to trained professionals.

But the GOP is not doomed. It never was. In fact, the party is enjoying a bit of a boost among voters today through no action of their own. The Democratic Party’s stumbles and the tone-deafness of their leader in the White House has benefited the GOP in ways Morning Joe’s panel guests could not have imagined at the start of the summer.

The Republican Party may yet overreach and the fight over the CR and the subsequent battle over the increase in the debt ceiling just may deliver the party a significant, though not fatal, blow. But this brinkmanship could also come to be seen as a deft political maneuver through the lens of posterity. While many political analysts can envision the circumstances which would result in both success and failure for the opposition party, the Morning Joe crew can only see doom in the GOP’s future.