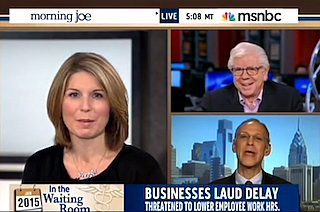 Upon word that a key provision of Obamacare will be delayed until 2015, a Morning Joe panel sparred over whether Republicans should be assisting in its implementation or standing back and letting it run what they’re betting will be its disastrous course. Guest host Mark Halperin asked GOP strategist Nicole Wallace if “Republicans should sit down with the president and say, ‘Let’s try to figure out how to improve it,’ as all major pieces of legislation require?”

“I think people in both parties should always be constructive,” Wallace responded, “but this law has been political from the beginning because President Obama refused to take input from Republicans from go.”

The claim drew a sharp rebuke from Carl Bernstein. “That’s just not the case,” Bernstein said. “One of the reasons that the legislation was deferred for so long is that the president and the Democrats on the Hill wanted to sit down with Republicans, and there was a caucus going on in the Senate for months until the Republicans finally said, ‘To hell with the whole thing.’ So let’s be factual about this.”

Ezekiel Emanuel, Rahm’s brother and a participant in the drafting of the bill, was flabbergasted at Wallace’s statement. “We met with many Republicans! We talked with them. Olympia Snowe gave us a list of ten things she wanted done in the bill. We did all ten. She voted in the committee for the bill and then on the floor against it. You cannot say we did not talk to Republicans. It was Republicans who had one word for this whole legislative process, which was ‘nyet.’ We’re not playing ball. We’re not going to discuss it.”

Halperin asked if the Obama administration’s muted, late-afternoon announcement about the implementation’s delay was a sign it was a bigger problem than they were letting on.

“It’s smart to do it,” Bernstein said, adding:

“Look, nobody is going to repeal this law. This law is here. It’s not going away, and it needs to be perfected. The Obama administration, in one area where it’s been particularly smart, is in the economy. We’re in a recovery, we don’t want to alienate business, the people in the White House are saying. They’ve taken a step that business is going to look favorably upon. It’s going to take this off the election table as well, and the Republicans are mad as hell about it in their interest of politicizing everything into an election year issue. But this one isn’t going to work.”

Wallace took issue with what she called the “jobless” recovery. “The Obama administration has to understand on some level that small business owners are the key to the recovery becoming a recovery in which people actually go back to work. If small businesses are hampered—”

“This never affected small business!” Emanuel said. “This is a nonargument.”