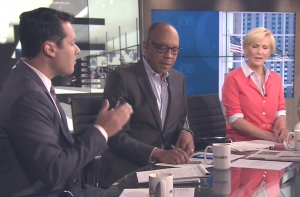 Host Mika Brzezinski began by reading off the results of a new poll finding Trump has a commanding lead on his Republican challengers and has made massive improvements in his numbers against Hillary Clinton. “Now that’s entertainment, Sam Stein,” she joked. “I’m entertained with how you’re going to wiggle out of that.”

“The Huffington Post is doubling down on its decision to label its coverage of Donald Trump’s presidential campaign as entertainment, despite the fact that Donald Trump is within six points of Hillary Clinton and dominating Jeb Bush, dominating the Republican field,” co-host Joe Scarborough noted.

“Sam, go home and tell them to change it,” Brzezinski implored.

“I’ve got a problem with this,” she continued, “This reminds me of the Fox debate, like a news organization trying to like control something and move it along in the direction that they believe is righteous.”

“You know, with all due respect to [founder Ariana Huffington]… I think it’s crazy,” liberal Washington Post columnist Eugene Robinson agreed. “We can’t dictate what is, and we can’t dictate who Republican voters say they want to have as president. And we have to cover that person. I mean, we just have to.”

Stein explained that when Trump made substantive policy points– like opposition to birthright citizenship– that issue is discussed in their politics section. “But Trump himself is an entertainer in politics.”