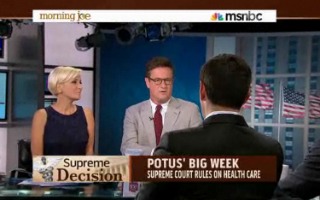 On Monday, the folks at Morning Joe took a moment to discuss the possible implications of the highly-anticipated Supreme Court ruling on ObamaCare. Panelist Steve Rattner concluded that Chief Justice Roberts is a “complicating factor,” adding that “from a purely political standpoint, losing this would be very tough [for the President] during this election campaign and personally, I think, a wrong decision for the country.”

Host Joe Scarborough pointed out that he’d initially thought that, perhaps, that “a loss could be win for Democrats,” which prompted Mika Brzezinski to add that “a loss is a loss.”

Panelist Mark Halperin agreed. “I actually think whatever the court rules, it’s bad for the President,” he said. “And that’s not my opinion; that’s based on reporting, including with a lot of Democrats. If they uphold the law, which is unpopular, it’s going to be a rallying cry for Republicans across the country. Even if the law is upheld, advertising and campaign rhetoric from Republicans will be all about health care. Democrats will largely… I predict, there’s not more than a handful of Democrats in the country, including the President, who will put health care front and center.”

“Why are Democrats hiding from health care?” Scarborough wanted to know.

Rattner, meanwhile, felt that the bill could be a great step forward but that, fundamentally, the bill is about insuring the uninsured and “that’s not the most popular thing among a broader electorate.”

As for how this decision will impact Mitt Romney, the panel agreed that he is the “godfather of this health care,” with Halperin adding that Romney is ultimately going to present voters with a choice: Do you want me to replace it, or do you want the guy who wasted a year and a half promoting something that was unconstitutional?

Have a listen, courtesy of MSNBC: