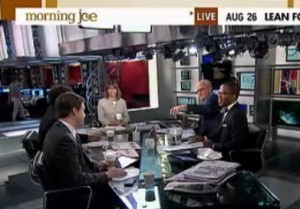 Texas Gov. Rick Perry‘s recent declaration that Washington, DC is a “seedy place” was the jumping-off point for a discussion of Perry’s anti-Washington appeal on Friday’s Morning Joe. In between fits of pique at the insult and wading pool-deep analysis of that appeal (Breaking: People Think Washington Is Dysfunctional!), The Washington Post’s Jonathan Capehart came closest to identifying the flaw in that appeal. As dissatisfied as people are with DC, do they want someone who will fix it, or do they want to install a demolition crew?

After running Perry’s “seedy place” quip, there were audible groans from the panel, an indication that they have at least some affection for our nation’s capitol.

Bloomberg’s Margaret Carlson summed up the appeal of Perry’s rhetoric, especially versus Mitt Romney, with the facepalm-inducing observation that “whether you like what he’s saying or not, he’s saying it. It’s very clear.”

While allowing that “”you’re almost drawn to it,” Perry’s spell is apparently only broken by insults. “I don’t like that we ‘live in a seedy place,'” she says, “but I just found out from Bill Karins we’re not going to be hit by this storm, God is not going to punish us. We’re to the left of it.”

It was, admittedly, a funny line, but while she’s extolling Perry’s style, Carlson barely touches on the substance, saying only that she’s “not sure” voters will analyze Perry’s record on jobs, and say “I’d do anything for one of those low-paying jobs without benefits.”

Jonathan Capehart observed that “Rick Perry says what he thinks, but doesn’t that get old?”

Carlson responded that “Republicans have been speed dating,” a reference to the constant game of leapfrog that has been going on since Donald Trump flashed in the pan earlier this year.

Following a clip of Michele Bachmann telling voters that she plans to shutter much of the city and repeal everything that isn’t nailed down, Capehart finally gets close to the heart of the matter, observing that Bachmann doesn’t have a plan to replace any of it.

That’s the problem. People are hearing the Republicans’ “Washington is broken” message loud and clear, but they’re not hearing, or at least not comprehending, the “so let’s dynamite the whole thing” part of it. If our political media doesn’t do a better job of explaining that, instead of being wagged by “perception” and the he said/she said seesaw, come next November, the unfulfilled promise of “Yes, We Can” will be replaced by “Fire in the hole!”