The National Rifle Association continued its headlong rush into political radioactivity by putting out an incredibly stupid, offensive ad in which they slam President Obama for sending his kids to a school with armed police officers, while expressing skepticism about the NRA’s plan to require armed security in every school. On Wednesday morning’s Morning Joe, panelist Mike Barnicle went so far as to call the ad “pornography,” while co-host Mika Brzezinski called the NRA leadership “sick in the head.”

The subject of pornography had come up earlier in the segment, and Barnicle used that as a segue to the NRA’s ad. “Joe mentioned the issue of pornography,” Barnicle said, “pornographic videos. Let’s get to the ad, okay, because this is pornography.”

Maybe he was talking about some other ad. Let’s take a look:

Okay, where is Mike Barnicle getting his pornography, and how can we all avoid it?

Barnicle went on to clarify that the ad was “political pornography,” and Mika and Joe expressed disgust at the ad’s use of the President’s daughters to prove a political point.

Mika summed it up by saying “I think some of the people who run that thing are sick. I really do. I think they are sick in the head.”

I agree, the ad is sick and offensive, but not just because it uses the President’s kids as subject matter. That’s a premise that I’m not willing to give up on forever, within reasonable limits. If this president, or some future president, did something truly unjust and hypocritical, like denying them health care or disaster relief, I would have no problem with an ad that pointed that out, provided it didn’t picture the children, or name them. More to the point, let’s say a president decided to deploy a force of TSA-like agents at all public schools, while sending his own kids to a grope-free private school. That would be a perfectly good tie to make this kind of argument, because it would be right enough, and important enough, to touch that boundary.

What makes this ad sick and offensive is that it is wrong, and stupid. Among the many, many stupid things about the ad is this graphic, which seems to prove the pro-gun-regulation point: 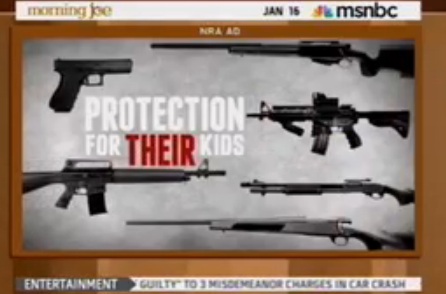 The ad is wrong, first of all, because President Obama sends his kids to a school guarded by policemen, while he doesn’t oppose police guarding public schools. He expressed skepticism that cops in schools would solve the problem all by itself. because the NRA explicitly offered it as their only tangible solution. Here’s what he told David Gregory: (emphasis mine)

I am not going to prejudge the recommendations that are given to me. I am skeptical that the only answer is putting more guns in schools. And I think the vast majority of the American people are skeptical that that somehow is going to solve our problem.

As it turns out, the President was absolutely right about the American people, they don’t support cops in schools, and they really hate the idea of armed teachers. Personally, I’m fine with police in schools, but like the President, I would much prefer that the cops who guard my kids at school didn’t have to face the prospect of being badly outgunned by… pretty much everyone. I would not, however, send my kids to a school guarded by sketchy rent-a-cops or jittery, Glock-packing teachers.

As it also turns out, President Obama was the one presidential candidate, out of two, who supported hiring more cops, which would make it easier for schools to decide whether they want to post a trained policeman on campus. The NRA supported the other guy. Hey, now that’s hypocrisy!