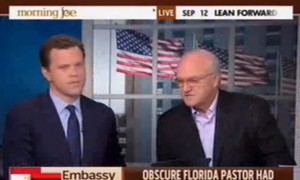 The stupidity in reaction to the attacks in Libya and Egypt, which has claimed five American lives so far, isn’t limited to presidential candidates and also-rans. On Wednesday morning’s Morning Joe, regular panelist Mike Barnicle opined that Pastor Terry Jones, who has been promoting the film that allegedly inspired the murderous riots, ought to be looked into by the Justice Department “as an accessory, before or after the fact.”

Jones, who was also blamed for deadly riots in Afghanistan last year over the burning of the Koran, has become part of this story by publicizing the film Innocence of Muslims, a 14-minute trailer of which is said to be the cause of the current unrest. The film was not created by Jones, but by Sam Bacile.

On Wednesday’s Morning Joe, Mike Barnicle told his co-hosts that “Given this supposed minister’s role in last year’s riots in Afghanistan, where people died, and given his apparent or his alleged role in this film, where, not yet nailed down, but at least one American, perhaps the American ambassador is dead, it might be time for the Department of Justice to start viewing his role as an accessory before or after the fact.”

The exchange drew little or no reaction from the rest of the panel.

Pardon my French, but f*ck that. There are many ways to respond to Terry Jones, from calling him an asshole to ignoring him, but there are two specific ways we do not respond to assholes like Terry Jones in the United States of America. One of them is that we do not try to criminalize free speech or free expression, even unpopular speech and expression. The U.S. Constitution and the 2 Live Crew tell us this.

The other thing we don’t do in the United States to respond to assholes like Terry Jones is burn shit and kill people.

Here’s the video, from Morning Joe: