Morning Joe Praises Romney For Hitting Obama With ‘Feather Of Kindness,’ Advises Ted Nugent To ‘Get Over It’
Video

Morning Joe Praises Romney For Hitting Obama With ‘Feather Of Kindness,’ Advises Ted Nugent To ‘Get Over It’ 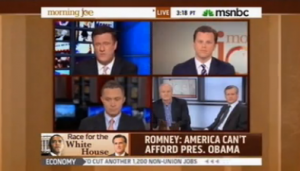 On Thursday, the Morning Joe panel took a look at how Mitt Romney‘s campaign talks about incumbent president Barack Obama, describing their tactics moving forward as hitting at the President with a “feather of kindness” while calling out the President for blaming the nation’s current economic problems on his predecessor, George W. Bush.

Just last night, for instance, we saw columnist and commentator Michelle Malkin advise Romney to stop referring to the President as a “nice guy,” as well as Romney refusing to engage in a discussion about Obama’s admission that he tried dog meat as a child. (Even though, it’s worth pointing out that Romney’s senior campaign adviser did Tweet a joke about the President’s dietary exploration, hitting back at David Axelrod’s previous attempt to make fun of the “Romney ties dog to roof of car” meme that’s floated around. Politics is a dog-eat-dog game, kids.)

Panelist Harold Ford, Jr. noted Romney’s progress, while opining that both he and Obama have much room for improvement. “Romney is starting to find his groove,” he said. “He had to take down every Republican nominee one by one with the exception of Jon Huntsman, who never really emerged as a serious candidate against him. That has helped him. You hear confidence in his voice now. The President has it too. But I got to tell you, he’s going to have to get even better. Both have to get better. But Romney has made progress just in the last week, just in how he is presenting and how he is projecting.”

Host Joe Scarborough noted that Romney would do well to not seem so stiff and polish and to “stumble a bit” (“God knows we do it here”), and praising the presumptive nominee for a “new line of attack” he’s brought up:

He had a line of attack that I think he needs to stay on… that I think will really work. And that is, basically, stop blaming Bush. Even if you inherited a lot of bad things from George W. Bush, this is your economy now. You said it yourself when you got inaugurated, that three years in, it would be your economy and it would be your blame. We’ve been discussing of course on this show, and John Meacham, we discussed last night the fact that you can’t blame this economy on Barack Obama any more than you can blame it on George W. Bush, any more than you can blame it on Bill Clinton, any more than you can blame it on Bush the first or Reagan. Yes, their policies do have a big impact. But we’re in the middle of a 30 to 40-year transition, and a painful transition right now. But that said, Barack Obama can’t point back to the other guys politically. I just don’t think that resonates anymore.

“You can see where the Romney campaign is going,” added Mike Barnicle. “They are going to attack him with a feather. A feather of kindness.’Wonderful guy, great parent, admirable selection for the president of the United States, not up to the job.'”

“By the way, Mitt Romney’s approach is the right approach,” said Scarborough. “It’s what we’ve been saying around the table for three years now: that Republicans’ best line of attack is not calling Barack Obama a communist or a racist or a Marxist. That does not win national elections. What wins national elections is saying, ‘He’s a good guy. He is a great father, a great husband. You know what? He seems like a great, great guy. He’s just wrong. He’s wrong on the economy. He’s wrong on foreign policy. He’s wrong in all the important areas. And I respect him, but it’s time for him to go home.’ That — if that’s the tack the Romney people take, then that’s a much smarter tack than most of the Republican party has taken over the past three, three and a half years. Trying to demonize a man that most of America likes. That’s the reality, Ted Nugent. Get over it.”