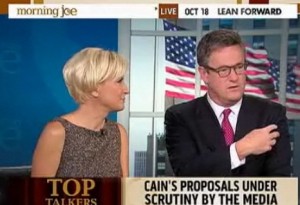 On Monday, we reported on a new, false narrative that current Republican presidential frontrunner Herman Cain wrote an op-ed piece in November that was at odds with his currently hot (and hotly debated) “9-9-9 plan.” On Tuesday’s Morning Joe, host Joe Scarborough and friends took up the story with gusto, saying that Cain might be “the biggest opponent of the 9-9-9 plan,” even while quoting sections of Cain’s Daily Caller piece that cut against the flip-flop idea.

As co-host Mika Brzezinski sets up the piece, Joe Scarborough and Time‘s Mark Halperin gleefully play along. “Now, some conservative blogs have pointed out that the biggest opponent to the 9-9-9 plan would be…”

“One of the other prominent candidates in the field,” offered Halperin.

“It’s Herman Cain himself,” said Mika, with a laugh. “Idiots.”

In the age of the bottomless internet memory tubes, stories about political reversals are particularly attractive, especially if there’s audio or video to go with it. However, as Michele Bachmann recently said of the 9-9-9 plan, the devil is often in the details. While it’s true that Cain argued against a national sales tax in November of 2009, as the quotes Brzezinski pulls make clear, Cain’s opposition was predicated on the rest of the tax code remaining intact. That would be like calling a doctor who decided to treat one patient medically “anti-surgery.”

The fact that Cain used the same slippery slope argument that his opponents now use against him is superficially persuasive, but not when you realize that he explicitly endorsed a national sales tax in that same op-ed, as part of a radical restructuring of the tax code.

More legitimately, the group went on to discuss Cain’s revisitation of deadly immigration countermeasures. In his book, Cain talked about a border fence with an alligator-filled moat, and this weekend, told a crowd that he’d construct a 20-foot electrified fence with barbed wire, and a sign that says “it can kill you!”

He told Meet The Press‘ David Gregory that he was joking, but later, told reporters that he still believed in a fence, “”and it might be electrified.”

So, I guess the “joke” part was the voltage only?

The Cain fence episode sent Scarborough off on a rant. “What’s wrong with a political party that Michelle Bachmann takes the lead, and Herman Cain takes the lead, and we can go through all the other people that have taken the lead,” Scarborough said. “What is wrong with a group of people in a political party that reward this type of behavior that has nothing to do with ideology?”

He concluded by going all Shakespeare on their behinds, saying, “It’s all sort of sound and fury, signifying nothing.”

Scarborough is probably correct in his assessment that Mitt Romney will be the last man standing, although Rick Perry’s fundraising haul might earn him a second look. Even Republicans who are somewhat in the thrall of Herman Cain’s charms will likely have to succumb to the reality that the steady stream of unelectability that comes out of his mouth make him a poor bet to beat Barack Obama, no matteer how much they love Cain.