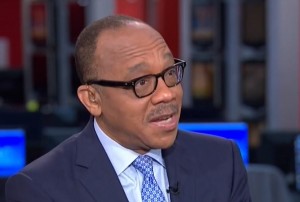 Pro-Trump Pastor Mark Burns made a lot of news over the weekend with a series of tweets and deletions and apologies, and on Tuesday morning, earned himself a derisive assessment from Pulitzer Prize-winner and Morning Joe regular Eugene Robinson, who laughingly called Pastor Burns “nuts” and said that he is “out of his mind.”

Joe Scarborough: Now you’re being a bigot. You don’t like him because he’s black.

Eugene Robinson: Because he’s out of his mind.

Joe Scarborough: What are you talking about?

Mika Brzezinski: Don’t you feel sorry for him?

Joe Scarborough: What do you mean he’s out of his mind? Just because he supports Trump?

Eugene Robinson: It’s not just that he supports Trump. Basically everything he said. Am I wrong here?

Mika Brzezinski: I just asked him a basic yes, no question and you all went after him aggressively and I was accused — the whole thing is kind of pathetic. It’s not worth any more oxygen.

For context, Pastor Burns was a guest on Morning Joe last week, where co-host Mika Brzezinski pressed Burns for an answer by repeatedly interrupting him, a performance which earned a demand for an apology from Republican presidential nominee Donald Trump. What followed in that segment was not aggressive questioning by the MJ panel, but a discussion of education policy between Pastor Burns and Reverend Al Sharpton.