Scarborough Says Among His Friends, Only ‘Conservative Bloggers’ Are Against Background Checks
video

Scarborough Says Among His Friends, Only ‘Conservative Bloggers’ Are Against Background Checks 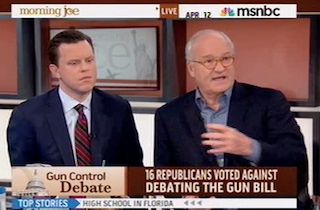 Given yesterday’s Senate vote to allow debate on gun legislation, it was all but guaranteed that Morning Joe would be talking gun control on Friday. And the crew didn’t disappoint — specifically discussing yesterday’s vote and those who opposed even debating the bill. Pointing to the same al Qaeda video the show played yesterday, they questioned the strategy of those willing to make “it easier to kill Americans.”

Those Republicans who voted against it, Mike Barnicle posited, are likely fearing a primary challenger from the right if they don’t oppose the measure. “In a sense, it looks as if the debate that will occur in the House, if such a debate does occur, is going to encapsuate a piece of the future,” he asserted.

James Carville pointed instead to a “very, very powerful lobby with a very enthusiastic following.” Joe Scarborough disagreed, citing the money that would flow into “targeted districts.”

They “got to know if they vote the wrong way on this, just on keeping guns out of the hands of al Qaeda terrorists, out of violent rapists, they got to know there is going to be millions and millions of dollars pored into their district and not just into the NRA,” he argued. The likes of Mayor Michael Bloomberg and Mark Kelly “are not going to smear them but just tell the truth and show members of al Qaeda talking about how their congressman made it easier to kill Americans because they wouldn’t have basic background checks that would keep assault weapons out of the hands of terrorists.”

To that end, Willie Geist agreed that the conversation is different this time around, an argument we’ve heard consistently since the shooting in Newtown, and questioned those who aren’t willing even to have a debate about the issue of gun control.

Later in the segment, this naturally led to Scarborough noting that none of his friends who grew up in the south oppose background checks — arguing that mostly they aren’t against it, except for the “conservative bloggers.”