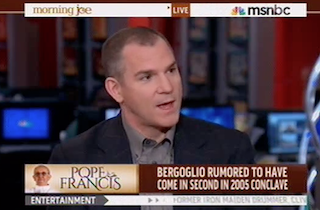 On Thursday’s Morning Joe, the crew naturally tackled one of the big news stories of the moment: the newly elected Pope Francis. The panel touched upon how this pope is known for his humility, forecasting the way the Catholic church could change going forward. Unsurprisingly, this also led to the topic of scandal and “secrecy,” which, Mika Brzezinski noted, is “a recipe for disaster.”

“You weren’t going to get somebody out of this round that was going to make a lot of change” in the areas of the role of women in the church and gay rights, argued the Washington Post‘s E. J. Dionne. But Pope Francis does have a strong record when it comes to the poor. “The Vatican is in enormous need of reform,” he added, noting that he’s heard arguments from both sides on whether the pope could make some progress on that front.

Joe Scarborough noted that his election was a symbolic and historic moment — pointing out that the first the pope did, instead of imparting his blessing, was a silent prayer. A “show of humility.”

Agreeing, Chris Matthews pointed to the characteristics of a great leader, later deeming him a “Bob Casey” pope. He’s economically liberal, but socially conservative: “He believes in helping the poor but being tough on moral issues.”

On a more negative note, they turned to the church’s scandal. “Secrecy, that surrounds the traditions of the Catholic church is a recipe for disaster,” Brzezinski argued. “While it’s beautiful to watch the symbolism unfolding at the Vatican as we watch this incredible transition…there is a lot of work ahead and some serious changes that need to happen blocked by tradition that may make it impossible.”

That, the New York Times‘ Frank Bruni added, is “perfectly symbolized by the conclave. They lock themselves away. We have no idea what happens until sometimes years later, if ever.”

The conclave itself is a “powerful metaphor for the Catholic church’s addiction to secrecy and lack of transparency — that’s been a big problem with the Vatican Bank, it’s been an even bigger problem with the child sexual abuse crisis. It’s unclear that can change.”