Morning Joe Takes On Woodward Vs. White House Spat: ‘You Do Choose Your Words Carefully’
video

Morning Joe Takes On Woodward Vs. White House Spat: ‘You Do Choose Your Words Carefully’ 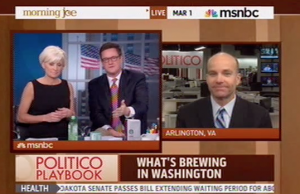 Morning Joe sought to further dissect the Bob Woodward/White House debacle, following yesterday’s release of the actual emails between Woodward and Gene Sperling. Like many others, the panel largely dismissed Woodward’s assertions after seeing the actual text, but Joe Scarborough did note that “you do choose your words carefully.”

The general consensus around the table seemed to be that Sperling’s just a nice guy, not someone who threatens people. Scarborough went on to question why Woodward would make such assertions when there’s obviously an email trail. “You don’t have guys whispering to you in basements anymore.”

“His sense of propriety was offended by this,” POLITICO’s Mike Allen contended. “His bigger point is, he says he doesn’t think this is the way to do business by the White House.”

Maybe, Scarborough remarked, things got a little personal and Woodward was the one who got thin-skinned. The tone of the emails was rather friendly, Allen said, alluding to communication between “mobsters.” “These are people who expect to do business with each other again.”

Referring to her husband who is an investigative reporter, Mika Brzezinski said she’s heard phone calls between him and officials… and they get ugly. “I can hear f-bombs flying at times,” she said — so this Woodward exchange is “as docile and polite as it gets.”

However, “you do choose your words carefully,” Scarborough said. “If I wanted to be polite but brush somebody back, a little baseball metaphor, not throw at their head but just brush them back, I would say regret. ‘You may regret it.’ It’s not a threat. […] I’m not saying Bob didn’t overreact here.”

He went on to discuss how not-so-pleasant messages are conveyed through niceties.

“I’m telling you as a friend. You would never, dot dot dot…”