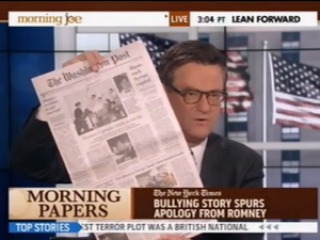 On Friday, Morning Joe host Joe Scarborough weighed in on the timing of this week’s big headline that presumptive GOP nominee Mitt Romney had held down a presumably gay fellow student and cut his hair. It it mere coincidence, he wondered, that this story has come out right on the heels of President Barack Obama‘s “big nothing” of an announcement that, while he personally supports gay marriage, he’ll leave it to individual states to decide for themselves whether they will allow it?

“I think when you’re president, this stuff is fair game,” said panelist Sam Stein. “I gets brought up, it’s put on the front page of the paper.” Later, he added that “it’s a very tough sort of line to draw whether this is political game. To what extent we should judge Mitt Romney now on who he was back then. But I think it’s absolutely fair journalism, to be honest with you.”

“It means nobody can run for president,” added Mark McKinnon. “When you look at, you know, what our public life looks like today, good people aren’t going into public service anymore. I was told the other day that the number of women running for office now is declining. And I think it’s the nature and the poisonous environment, and the media scrutiny, that are just driving good people out.”

“And there’s no doubt that the timing of this, Willie Geist,” Scarborough said, “the timing of this obviously is in line with Barack Obama coming out a couple of days ago, saying — I’m sorry. It’s a fun — I mean, the media response to Barack Obama saying absolutely nothing. In the immortal words of Pat Buchanan, celebrating “a big fat nothing burger” when Barack Obama basically said, ‘I’ve got the same position on gay marriage as Ron Paul or Ronald Reagan. I’m not going to do anything about it. The states can do what they want.’ But it seems to me that a story like this is timed to go along with the media celebrating Barack Obama saying he’s going to let states ban gay marriage.”

“Mark Halperin said it yesterday on the show, and I think he’s right,” responded co-host Willie Geist. “There’s no downside for the President given that just about every single member of the media agrees with his positions. So it will be celebrated. The timing of the piece — I’m sure they’ve been working on it for some time — it is a bit curious, the day after.” He then noted that ABC News had spoken to the sister of the man allegedly attacked by Romney all those years ago, who shared that the portrayal of her brother “is factually incorrect and we are aggrieved that he would be used to further a political agenda.”

“So, nothing new there,” added Scarborough:

Secondly, Barack Obama told Robin Roberts that he was taking the Joe Scarborough position, the William F. Buckley position. The Ron Paul position. The federalism position. The 10th amendment position. The state’s rights position, that we’re going to let states decide about gay marriage. This is as conservative a position, and with all due respect to what Mark said yesterday, nobody that I know in the media believes this. Everybody in the media that I talk to behind closed doors thinks the federal government should come in and declare gay marriage constitutional. So, again, I think this is a shameful episode for the mainstream media, who covered up for Barack Obama’s hypocrisy all along, saying “I’m evolving on this issue” to now making it even worse by claiming that a statement that means absolutely nothing. I think the New York Times said was a “historic moment” for gay marriage. It just wasn’t. It was nothing.

“Well, in my estimation, it was nothing historic or heroic about what the President said,” agreed Michael Steele, who also called this “$15 million worth of pandering.”

“Again,” Scarobrough reiterated, “I am very disappointed that the media has continued to cover up for Barack Obama, his hypocrisy on this issue. There’s no way to spin this, Jon Meacham. I wrote in a blog last night on Politico that never have so many Democrats been champions of state’s rights since Lester Maddox and George Wallace ran southern states back in the days of segregation.”