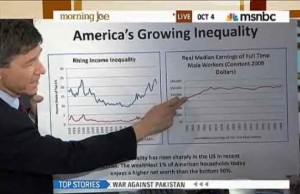 On Tuesday’s Morning Joe, host Joe Scarborough went over some scary indicators for President Obama‘s reelection prospects, and spoke with Dr. Jeffrey Sachs about his upcoming book The Price of Civilization: Reawakening American Virtue and Prosperity. Sachs was critical of Obama’s jobs plan, which he called a “gimmick,” but his larger criticism was of America’s failure to respond to long-term challenges. He busted out a bunch of charts to show just how bad things have gotten for average Americans, and for how long.

Scarborough set the stage for the chart show by pinpointing the turning point for America’s climbing income inequality, quoting Sachs’ book. “1973 was the peak for the average male worker in America if you adjust the numbers and everything,” Scarborough said. “America has been declining in terms of real wages since 1973.”

Scarborough and Sachs point to the influence of money in our politics as a major factor in generating this income inequality, which Sachs’ chart reveals is nearly as high as it was during the Great Depression. “I think the parties have been bought off,” Scarborough says, stating the obvious.

Sachs’ solution, that we need to raise taxes (the “price of civilization” that his book’s title refers to), reveals the fundamental weakness in our politics. Voters are easily seduced by the promise of lower taxes, even when they’re not the ones benefiting from them, and so, have been enlisted in their own demise.

The result is a self-perpetuating cycle that leaves a weakened working class unable to move up from generation to generation. Sachs points out that the only group doing well in today’s economy, educationally speaking, are those with advanced degrees. “If kids come from an affluent family, they can pay the tuition,” he says. “But if you’re coming from working class family, if you’re coming from a poor family, the chance that you’re going to make it all the way through college is very small.”

The crushing pressure that Sachs describes is a big reason why you’re seeing all of those folks Occupying Wall Street, and if the length and breadth of these issues is any indication, why that protest might have surprisingly strong legs.